Time is running out to see beautiful wildflower displays 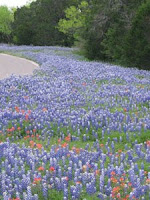 You have a few more weeks to see the most amazing displays of wildflowers in central Texas.  From Austin to Houston via Brenham or spoking out to San Antonio or Burnet County, roadsides are filled with a great variety of red, blue, yellow, pink, white, and magenta blooms. 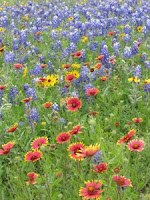 Pick your favorite route around Marble Falls, Kingsland, Mason, Lake Buchanan, Llano, Burnet, or Fredericksburg (go north on TX 16 and around Enchanted Rock).  Wherever you drive, the flowers are outstanding.  Plan at least half a day--a whole day is better--for your adventure.  You'll want to stop often to admire the scenery and take dozens of photos.  You may even decide to backtrack to a spot you passed by quickly but realized was truly spectacular. 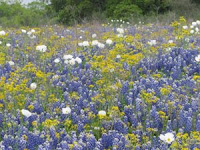 Willow City Loop is one of the best known destinations for people wanting photos of kids or pets among the colorful flowers, and for good reason. The fields are loaded with blooms, but keep in mind that it's private property, and some land owners aren't crazy about folks tramping down their flowers. Contrary to what some think, it's not against the law to pick bluebonnets, Texas' state flower.  However, it is against the law to trespass, so be courteous when choosing a place for that perfect picture. 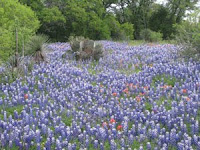 Find out what kinds of wildflowers have been spotted, where, and when at www.lone-star.net/wildflowers/ where individuals post their experiences each day, or check www.texaswildflowerpictures.com/update.htm
Photos by Beverly Burmeier
Posted by Beverly Burmeier at 9:28 PM 2 comments:

Wildflowers in the Hill Country 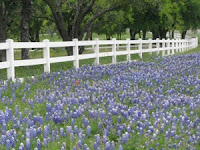 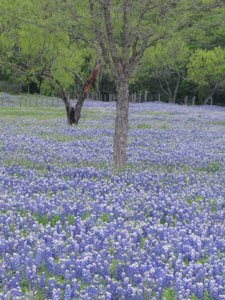 With all the reports of fabulous wildflower displays in the Texas Hill Country this year, we just had to take a wildflower drive.  We were not disappointed!
Last Sunday, April 11, we headed out of Lakeway to SH 71, drove by Horseshoe Bay at Marble Falls, took Park Road 4 by Longhorn Caverns State Park and Inks Lake, detoured down a couple of recommended rural roads, and followed Prairie Mountain Road into Fredericksburg.  By that time it was getting dark, so after dinner returned to Austin. 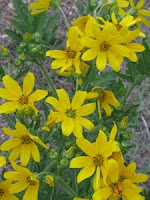 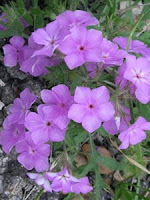 In all, we drove more than 250 miles and saw truly awesome sights--many varieties of wildflowers along every road and in surrounding fields.  Almost any route you take through the Hill Country will provide bountiful vistas of spectacular blooms.  I'll let my pictures tell the story--and watch for more soon.  Flowers should still plentiful for a couple of weeks. Thanks to a cold winter and wet spring, we have the best display in a decade, so get out there and take advantage of this opportunity. 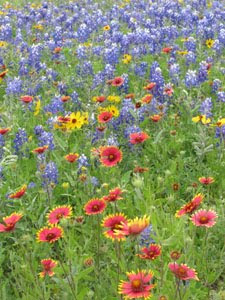 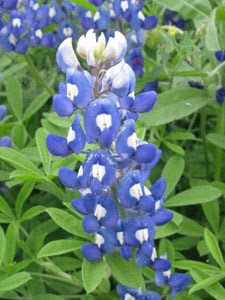 Posted by Beverly Burmeier at 9:55 PM No comments:

For many tourists, Cusco, Peru is just a stopping point on their way to see Machu Picchu. While ruins of the mysterious mountain city are truly a wondrous sight, visitors shouldn’t miss another amazing complex of Incan ruins. Located just 10 minutes by car from Cusco, Sacsayhuaman (pronounced “sexy woman”), showcases a spectacular fortress built of huge carved rocks joined perfectly without any cement or mechanical aids.
Situated on a hill overlooking the Sacred City of Cusco, center of the ancient Inca Empire, Sacsayhuaman showcases the incredible human skill required to create this historic site. Representing the head of the puma (Cusco was designed to mimic the shape of a reclining puma), Sacsayhuaman is remembered as the place where the Spanish conquered the Incas. After the temple was destroyed, its stones were used to build Catholic churches. Spanish cities were built on top of Inca constructions. Several buildings and three big towers built on terraces were uncovered just 30 years ago.

Now preserved in a national park, the ruins were built over a period of seven decades using labor from 20,000 people. It is believed that the construction was not intended as protection, even though it is practically enclosed by three slopes. Rather, the archeological site is a harmonious blend of human skill with nature and the underground (Mother Earth). Sacsayhuaman was the location for religious festivals and important celebrations until the Incas were overcome by Spanish conquerers in 1531.

Walking the grounds, I marveled at the intricate detailing amid massive stone walls. The zigzag design of one large wall is believed to represent lightening, evolution, and teeth of the puma. Doorways are small, reflecting the slight stature of the Inca people, yet these were built with protruding stones that gave off shadows which made them seem larger. Piecing together the irregular architecture is like fitting puzzle pieces into the proper places.

At 11,000 feet, the region offers opportunities for myriad outdoor activities such as hang gliding from a mountain, rafting and kayaking on the Urubamba River, or trekking along the Inca Trail. It’s an awesome place, as large in scope as the culture that dominates Peruvian history.