There’s a popular bumper sticker on cars in Texas: I wasn’t born here, but I got here as soon as I could.
Don’t laugh! That’s how most Texans feel about their state. The pride is home-grown and starts early for those who were lucky enough arrive in the Lone Star State as children. A Texas Year: Twelve Months in the Life of Texan Kids was created to share this (justified!) pride and reinforce the diversity encompassed within this large state. 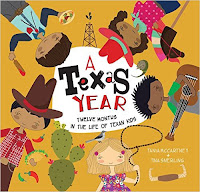 Author Tania McCartney and illustrator Tina Snerling introduce elementary-aged readers to Texas children representing a blend of cultures and races. Through the activities of Luis, Alexis, Christopher, Ethan, and Mia, readers learn about celebrations, traditions, and events that have become part of everyday life—not only for the featured children but also for themselves.
Serling’s delightful drawings of this hodge-podge of childhood experiences showcase children at home, school, and play while enjoying memorable snippets of life. 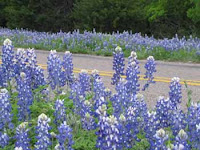 Presented in a month-by-month format, the book includes hundreds of dates, places, and activities that have become traditions for Texas children, including many ethnic celebrations that are now embraced on a Texan calendar such as the Korean Festival of Lanterns, Cinco de Mayo, and Kwanzaa.

Young readers will learn about outstanding destinations including Johnson Space Center, San Antonio River Walk and the Alamo, Texas Hill Country, Big Bend National Park, and the Gulf coast. They’ll find out more about Texas rodeos, Austin’s Pecan Street Festival, cowboy boots, bluebonnets, Tex-Mex food, and the State Fair in Dallas. Texas is such a large state that it might be hard to comprehend the variety of its landscapes without—beaches, woods, canyons, plains, and even mountains—so the illustrations provide cute visuals.


If your child is a Texan, he or she will recognize many of the things covered in the book. If your child doesn’t know much about the state, this book (available on Amazon) is a good introduction to the diversity found there.

Posted by Beverly Burmeier at 10:39 AM No comments:

Flying to Mexico is easier now

Thinking about a vacation in Mexico? Lounging on the beaches of Cancun or Cozumel? Deep sea fishing off the coast of Puerto Vallarta or Los Cabos? If you wait until November, you’ll have an easier time booking a flight.
Since August 2016, most restrictions on flights between the United States and Mexico have been lifted. That means airlines from both countries are able to fly whatever routes they want whenever they want. Airlines can set their own prices, too, according to Thomas Engle, State Department deputy assistant secretary for transportation.


Increased competition should result in lower airfares—and especially in lower taxes that often inflate the price of a ticket up to 30 percent.
American, Delta, and Southwest will offer new flights across the border later this year. United will follow if demand proves sufficient. This follows a December agreement between U.S. and Mexico in which both countries agreed to open their aviation markets to each others’ carriers instead of limiting specific routes to two or three airlines from each country.


Regulations are still in place for the number of takeoffs and landings at the busy international airport in Mexico City. But that won’t impact the new routes from U. S. airlines which are mostly heading to resort towns in Mexico.
Southwest has already announced daily flights starting on December 4 from Los Angeles to Cancun, Los Cabos, and Puerto Vallarta. American Airlines will start service on November 4 From Los Angeles to Cancun and to Puerto Vallarta on November 15.

﻿
The intention of the relaxed agreement is to ease travel for Americans and increase Mexican tourism to the U.S. “We think it will help drive economic growth in sectors well beyond aviation, including tourism and manufacturing,” Engle says.
Images from free photo sites.
Posted by Beverly Burmeier at 3:23 PM No comments:

Every path leads to another spectacular view.  It’s Fantasyland for the horticulturist and Wonderworld for the masses. Famed on , is a blue-ribbon showplace in one of the loveliest corners of the world.
Visitors marvel at the variety and harmony achieved by co-mingling easily recognizable flowers like dainty purple daisies and ruffled pink geraniums with unusual specimens such as teardrop fuchsia and delicate drooping trout lily.  Since passing the century mark in 2004, privately owned Butchart Gardens has featured more spectacular scenes than ever within its 55 acres. 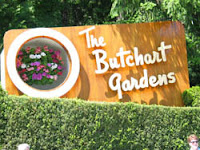 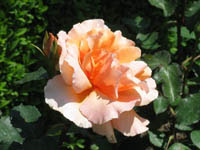 The Twelve Days of Christmas displays are crowd pleasers every year, and visitors enjoy ice skating on the outdoor rink during the winter.  Background shrubs take center stage while flowering plants are dormant. The family home on the estate was christened “Benvenuto,” Italian for “Welcome,” and during the winter it is open for tours showcasing memorabilia that chronicle development of The Gardens.

In 1904 Jennie Butchart, wife of successful cement manufacturer Robert Butchart, began to beautify an abandoned limestone quarry near the family home. Originally, the quarry was expected to support the cement factory Butchart built in 1898 on Tod Inlet.  However, the quarry was soon exhausted, leaving an ugly, empty gravel pit.
As a diversion, Jennie set about transforming this bleak sight.  Under her personal supervision, top soil was brought in by horse and cart, and other improvements were made.  Trees, shrubs, and flowers planted under her watchful eye eventually took shape as the . 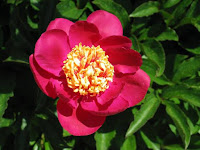 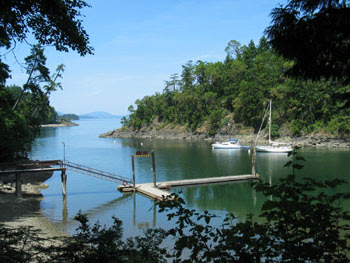 When you stroll on well-maintained paths meandering through several distinct garden sections and expansive lawns or rest beside one of the many cooling water features, you’re experiencing the result of more than a century of pride and caring from Butchart family members.

Getting there: Butchart Gardens is located on Vancouver Island, 14 miles north of Victoria and 12.5 miles south of the Vancouver-Victoria ferry terminal at Swartz Bay. Ferries are also available from several points in Washington, or you can arrive by plane or boat. Allow at least three hours to absorb the elegance of Butchart Gardens.

Posted by Beverly Burmeier at 7:00 AM No comments: