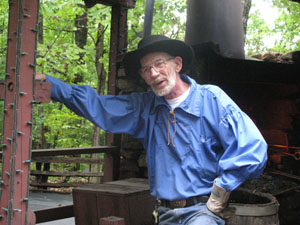 Ray Johnson grins broadly as he rubs the newly forged knife blade between his fingers. “I’m making tools the old-fashioned way,” he says explaining his passion for a dying art.


Lucky for Johnson, he has an outlet for his talents. Known as the “knife-maker poet” at Silver Dollar City in Branson, Missouri, he gets to demonstrate his craft regularly. Once in a while he gets to recite his original poems for fascinated onlookers.
Retirees like Johnson are actively recruited at Silver Dollar City near Branson, Missouri.  “Many older workers are looking for creativity they may not have had in previous jobs,” says Lisa Rau, Director of Public Relations for the park. “We love them because they have a good work ethic and they are loyal to the park and its ideals,” she adds. 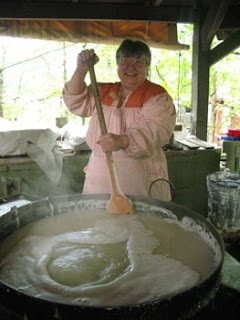 Granny Martha Sudweeks, dressed in prairie-style duds, stirs up bubbling batches of lye soap and extols virtues of the bars to anyone within listening range. Although she has been making soap since her grandmother taught her how at age five, she has been cooking lye in her cauldron at Silver Dollar City for just five years.
“We used to joke about working at Silver Dollar City, and here we are,” says Debbie Rury, who began a career as a jewelry maker after moving from Dallas a year and a half ago.  Although her background is in fabric art, she now makes copper and silver jewelry in the studio of coppersmith Rex Morton.  Keeping it all in the family, her husband Rob is apprenticing with Morton to learn skills needed for working with copper. 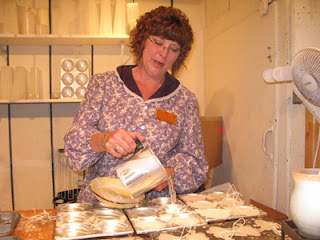 Another couple who found post-retirement employment at Silver Dollar City are Claudia Hebing, who has been ladling hot wax into candle molds for two and a half years, and her husband, who works as a ride mechanic.  Coming from Indiana, Claudia says they were drawn to Branson by the Southern hospitality and warm climate. She enjoys the challenge of creating beautiful and unusual candles, another art that’s become a curiosity in these times of look-alike manufactured goods. 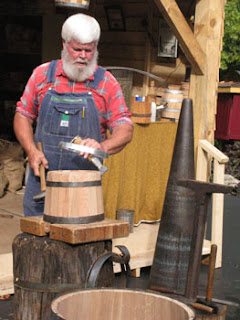 Other mature workers, many dressed in period costumes, can be found practicing old-fashioned trades at the candy factory, flour mill, foundry, and ice cream shop.  They love the work—at least according to all the older workers I talked with during a visit, and their patience, graciousness, and eagerness to share skills from by-gone days makes seniors valued employees at parks like Silver Dollar City. 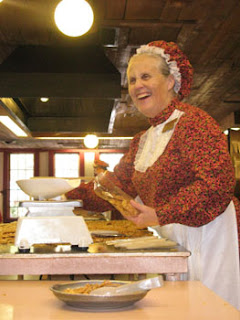 Most of my travels find me overnighting in reasonably modest accommodations, but I felt like--and was treated like--royalty during my stay last June at Ballyfin, a lavishly restored Regency Irish mansion .


Ballyfin is one of the most historic houses in Ireland, a significant 19th century mansion built in the 1820s for Sir Charles Coote who purchased the property in 1812 from William Wellesley Pole, brother of Duke of Wellington.  The Cootes owned the house for a hundred years before selling the estate in 1928 to Patrician Brothers who ran a successful school there.  Brother Maurice Murphy had a particular fondness for the house; so when the school no longer was profitable and the buildings had deteriorated, he sold it to the present owners who opened it for guests in May 2011.
Upon entering the house for our hosted visit, my husband and I could see that it was built for entertaining.  After Coote married in 1819, he and his bride toured Europe collecting suitable furnishings for the house, which was completed in 1826.  Sir Coote was a member of Parliament from 1820-1850 and entertained lavishly during the six months a year the couple spent at the estate.  It was entirely self-contained, growing all fruits and vegetables on premises, including bananas in the conservatory, which was considered the height of luxury.
During the last decade, the home was painstakingly restored to preserve this part of Ireland’s architectural heritage.  One of the few structural changes needed was converting dressing rooms to bathrooms. Mahogany doors and windows are all original.  Inlaid mahogany wood flooring, decorative Spanish motifs, floral patterns in plaster, and elegant stucco work are reminiscent of the period in which it was built.  Highlights of the grounds include an enormous lake, 18th century grotto, and medieval tower.
The intent is for guests to feel like they’re staying in a country home instead of a hotel, not hard since there are only 15 rooms. Hospitality is impeccable, linens are 100 % white damask Egyptian cotton made in Italy, and  guests enjoy complimentary room bar, laundry service, shoe cleaning, and umbrellas and Wellington boots. After our exquisite dinner of organic salmon we convened in the bar and listened to music from a trio of musicians playing Irish harp, flute, and accordion.
Public areas include the “whispering room,” a small morning room with an echo; an 80 by 30–foot library, the biggest room in the house; and a gold drawing room for ladies. The conservatory, added in 1855 as a place to bring visitors and grow exotic plants, is now a cheerful sitting room decorated with orchids and green and purple upholstered wicker furniture. A cascade at the rear of the house is reminiscent of Lake Como.
Maps, paintings, early photographs, archival documents, and diaries helped restore the landscape to 18th and early 19th century form.  Lovely gardens are open to the public. Larry and I explored some of the eight miles of paths that wander through woodlands and around the 614-acre estate on provided bicycles; canoes and golf carts are also available.  A pool, tennis, croquet, archery, falconry, bird watching, star gazing (telescope in the tower), music recitals, wine tastings, art and architecture tours, fishing, spa treatments, and golf (three courses within 50 miles) guarantee plenty of activity if that’s your choice.
Ballyfin is 35 miles from Kilkenny and 60 miles from Dublin, either of which makes a fine daytrip.  We had a wonderfully extravagant but totally satisfying experience in this magnificent five-star Irish mansion.
Photos by Beverly Burmeier

Posted by Beverly Burmeier at 9:29 AM No comments:

Win a culinary vacation to Albuquerque


Now you can win a trip to indulge in all of these tastes for yourself. Enter online before September 30 at www.ItsATrip.org/foodtrip to win this special getaway. Drawing will be held on October 3.
Enjoy a three-night stay at Los Poblanos Historic Inn & Cultural Center, a quaint inn with an organic farm, six acres of formal gardens, lavender farm, art gallery and cultural center. The winner will also receive Los Poblanos recipe cards, a cookbook, culinary lavender and a private tour of the grounds.
During four days in Albuquerque, the winner and a guest will experience:
Photo and information courtesy of Megan Mayo of Albuquerque Convention and Visitors Bureau, www.itsatrip.org