Taking a winter holiday to the Yucatan peninsula of Mexico just got easier for folks in Central Texas.
Delta Airlines is offering special fares from Austin and San Antonio to Cancun, Mexico to celebrate its launch of new nonstop weekly service between those cities.  One-way fares from Austin and San Antonio to the popular Mexican resort destination are available from $69.00 for travel between February 19 and March 26, 2011.
The service will operate on Saturdays, using 142-seat MD-88 aircraft, equipped with 14 seats in First Class and 128 seats in Economy.  These flights are part of Delta’s seasonal expansion during the popular high season in the Mexican Yucatan.
Flights leave Austin at 7:45 a.m. and arrive in Cancun at 10:00 a.m., giving you a full day for fun activities, exploring Mayan ruins, lounging on the beach, or shopping.  Departures, also on Saturdays, leave Cancun at 10:50 a.m. and arrive back in Austin at 1:30 p.m.  Similar schedules apply to San Antonio service.
Tickets are currently available for the special rate at www.delta.com and other online ticketing channels.
Posted by Beverly Burmeier at 4:04 PM No comments: 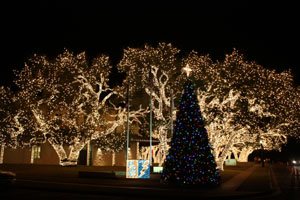 Christmas is glowing in Johnson City, Texas, as Lights Spectacular displays shine throughout the town, with the Blanco County Courthouse as centerpiece of the fabulous show.  More than 100,000 twinkling lights are shining during the 21st year of this stunning display.
Additionally, the Pedernales Electric Co-op’s Headquarters boasts a lighted forest of over one million lights. Together with lighting on local homes, businesses and churches, the Christmas presentation makes a glowing gift from the city to the public.  It’s an extraordinary exhibit worth the hour’s drive from Austin. 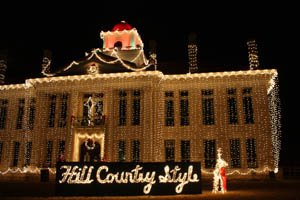 Lights shine each night until midnight through January 1, 2011. The Courthouse, where visitors can enjoy a decorated tree and sales of ornaments and crafts from the Garden Club, is open from 6-9 p.m. Saturday and Sunday nights,.  Carriage rides are available, and some local businesses have extended hours for holiday shopping or browsing through galleries.
Johnson City (named for the family of former president Lyndon B. Johnson) is located in central Texas, 48 miles west of Austin and 60 miles north of San Antonio.  It is one of the best stops on the Texas Hill Country Regional Christmas Lighting Trail—an unforgettable site even if you can’t travel the entire trail. 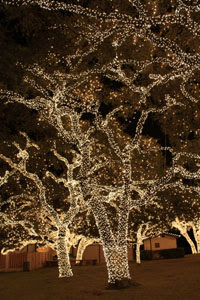 Bed and Breakfast: Chantilly Lace Country Inn B and B and Restaurant
Photos by Larry Burmeier
Read more travel by Beverly at Striped Pot and Austin Adventure Travel
Posted by Beverly Burmeier at 7:10 PM No comments:

Holiday shopping can be an adventure

If you have travel plans for the holidays, you're probably trying to finish your gift shopping as soon as possible. It's almost the deadline for mailing packages, which should be wrapped in plain paper, not festive red and green Santa styles.

So you may be in for a real adventure during the days left before Christmas. It’s getting late to place online orders, and stores are overflowing with harried, short-tempered clerks.
﻿﻿
Put a smile on your face, and tackle the task with the same enthusiasm as hiking your favorite trail.  Here are tips from Ryerson University’s Ted Rogers School of Retail Management to help you zip through your last-minute shopping spree.

﻿ Buy the same gift for friends and relatives—maybe choosing different colors or themes.  Make it your signature gift, a tradition to follow each year.

If you know a retailer is holding a sale, try shopping after 6 p.m. the night before it starts.  Often discounts are already marked.

Comparison shop via the Internet, even if you buy in a brick and mortar store.

Create a personalized gift basket that suits a particular person.  If creating multiple baskets, you can buy in bulk and divide items among the baskets.

Keep packages delivered to your car out of sight--covered or in the trunk.

And a few more tips I’ve learned through the years:
Photo by Beverly Burmeier

Posted by Beverly Burmeier at 10:30 AM No comments:

Need a break from cooking, shopping, and wrapping gifts? Head toward San Marcos, Texas for an evening visit to Santa’s Ranch, one of the most spectacular Christmas light parks in central Texas.

You’ll drive through nearly a mile filled with holiday scenes illuminated by more than 1.3 million lights.  A 50-foot Christmas tree greets guests at the entrance. Lights twinkle in 100 displays and animations with trains such as Eskimo and sled dogs, carousel, space shuttle, village scene, and a 60- foot long Noah’s ark. Several crosses and Biblical scenes keep the Christmas spirit strong. Favorite fantasies include the drive-thru tunnels. The awesome blue-light tunnel is a shimmering “river” filled with 800 feet of twinkling lights.

Once again Frank and Melanie Bass invite  families to drive through their holiday park, located on 12 acres of wooded rolling hills. Many visitors return each year to see what has been added. If you’re handy with a camera, there are lovely scenes around every turn, but you must stay in your car during the leisurely drive.

Although other Christmas displays and parks in the Hill Country have closed, Santa’s Ranch Christmas Light Park has been successful in providing a wonderful holiday treat for families and friends to share.  And recent mild weather is perfect for an outing like this. From Austin take I35 south, exit 199, and stay on the access road for about a mile.

Posted by Beverly Burmeier at 12:03 PM No comments:

Plan a getaway and support more than 36,000 Special Olympics Texas athletes at the same time. Enter the Special Olympics Texas' Continental Airlines raffle, and you could win two First Class or Business First Class tickets valued at $4,000 each.  These could be your tickets to Athens, Greece for the 2011 Special Olympics World Games... or travel anywhere Continental flies.
Purchase 1 raffle ticket for $25 or 5 raffle tickets for $100. Only 1,000 tickets will be sold from November 18, 2010 to January 3, 2011. Drawing will be held and winner will be announced on January 4, 2011. For more information, contact Joan Jarrett at 713.290.0049, ext. 223.
Click here to purchase your tickets online now!
Click here to download an entry form that you can mail or fax.

If you win, you’ll receive two certificates for travel from a single destination within the 48 contiguous United States, Alaska, Canada, Caribbean, Mexico or Central America to a single destination within either South America, Europe, India, Israel, Hawaii, CMI or Asia. Certificates are valid for travel through September 1, 2011.
Posted by Beverly Burmeier at 11:06 PM No comments:

The holiday season is fast approaching, which means people are getting ready to pack their bags and travel. Whether you’re visiting loved ones or taking a winter vacation, disaster may be just an exit away when everyone piles into the car for a long road trip.  Stress from the flurry of activity before leaving, bodies trapped immobile for hours in a moving vehicle, and uncertainty about what you’ll find on arriving at your destination can all add tension to the trip.
These tips will help keep the fun in family travel.
Before you go
Plan for holiday driving
Disconnect
Reconnect
At your destination
BONUS: Save up to $40 on your Weekly or Weekend Hertz Rental at the airport when PC#151034 is included in your reservation of an economy or higher class car.  Offer valid for pickup through January 31, 2011.
Posted by Beverly Burmeier at 7:33 PM No comments:

Delta offers free Wi-Fi on flights during the holidays

Taking off doesn't mean you have to disconnect, especially this holiday season. With Wi-Fi on more than 2,200 domestic daily flights, you can check email, connect with friends and family, or catch the big game above 10,000 feet.

Delta Airlines has teamed up with Google Chrome — a really fast web browser — to offer complimentary Gogo® Inflight Internet on all Wi-Fi-equipped Delta flights through January 2, 2011.


Shop, surf or just stay in touch onboard your upcoming flight. To connect for free, just follow these easy steps:
For more information, check your seat pocket for the in-flight Internet information card or Sky magazine's In-flight Communication page.

Posted by Beverly Burmeier at 10:09 PM No comments:

If you’re planning to fly from Austin to visit family or just get away during the holiday season, you may be wondering how changes in security procedures are affecting departures at Austin-Bergstrom International Airport. Here's my personal report and results of a survey regarding new TSA regulations from Skyscanner, a leading travel search site. Read the full article at  http://www.examiner.com/adventure-travel-in-austin/have-body-scans-hit-the-austin-airport
Posted by Beverly Burmeier at 9:46 AM No comments:

One of the most interesting sessions I participated in during the preview sailing on Allure of the Seas was a tour of the bridge—command central for the huge ship. Captain Hernan Zini oversees all activity from this area. Wide windows look out over the passing ocean for a bird’s eye view of the surroundings.


But the real task of piloting the newest Royal Caribbean ship falls on technology—computers and radar constantly update the crew with information about the weather, ship’s position, speed, direction, currents, and much more. In fact, Captain Zini said they can take the ship from port to port relying entirely on data provided by computers.

Sensors calculate the ship’s position in the water; only seven feet are below water level, while the floating resort soars 213 feet above the surface. The ship cruises at a speed of 22 knots, but the really neat thing is it can also travel sideways at four knots. Imagine having a car that could drive sideways.

Four bow thrusters with 7,500 horse power each move the 225,000 tons of wood and metal smoothly through the water. Despite some windy weather causing waves to kick up, I never felt movement on the ship. That’s a good thing, too, for the entertainers, especially dancers and high divers, who could miss their mark if the ship rocks even slightly.

Crew members work in eight-hour shifts, with four hours usually spent on the bridge observing the ocean and four hours monitoring safety devices. Safety is taken very seriously, stressed Mathias Sebom of Sweden, Superindendent of Safety. Crew spend much time monitoring public areas of the ship through 1200 cameras stashed inconspicuously. That allows them to watch movement of passengers and know if anyone is in distress. The fire alarm system alerts staff if there is smoke anywhere, so security personnel can immediately check out the cause. Separate fire zones are delineated, and if there is a problem, it can be contained to one section of the ship. Drills are held weekly, and extensive training is ongoing to meet any challenges that might happen at sea.

Zini, at age 43, is one of the youngest captains of a major cruise ship. He has been sailing with Royal Caribbean for more than 19 years, having developed a passion for sailing and rowing as a child in Argentina. Despite the enormous responsibilities he has on a ship that can carry upwards of 7,000 people, Zini maintains his sense of humor. As the Allure prepared to depart Port Everglades in Fort Lauderdale, he playfully announced over the PA system that we’d be on our way “If I can just find the keys. Now where did I put those keys?”
Photos by Beverly Burmeier
More articles on Allure of the Seas at http://www.stripedpot.com/
Read other travel at www.examiner.com/adventure-travel-in-austin/beverly-burmeier
Posted by Beverly Burmeier at 5:00 PM No comments: