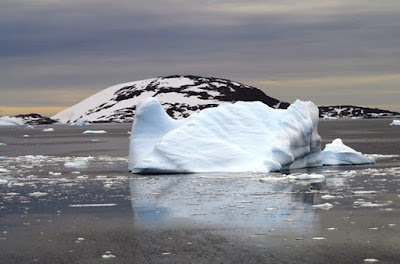 Although I was initially more intrigued by the incredible beauty of the ice and snow in Antarctica, I soon discovered that this is a magical land much more thrilling than I could ever have imagined. The reason? Abundant wildlife and especially penguins.Watching these peculiar animals of the Southern Ocean was exciting and quite riveting. 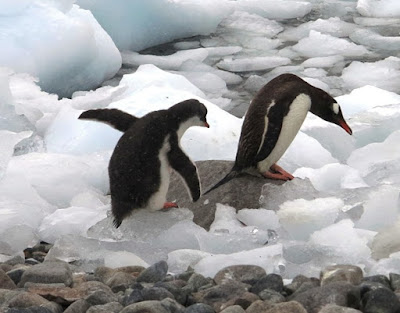 When landing on the mainland where large groups of penguins lived on our Antarctic expedition, we didn’t want to disturb or frighten them, so we stayed at least 15 feet away (even though sometimes they came closer to us). We learned that wildlife always has right of way in Antarctica. So we kept our distance from “penguin highways,” distinguishable paths they take to go in and out of the ocean. 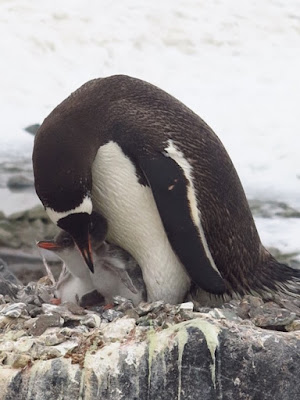 Yes, penguins are fun to watch, partly because they are social animals and their interactions often resemble those of humans. Moms feeding chicks, youngsters cavorting on the snow, splashing in the sea, waddling on the ice—it was all delightful to see as we observed several different colonies during our journey down south.
Chinstrap penguins are plentiful and easy to distinguish because of their black back and head and line across the chin. We learned that a male will build a nest from rocks and then wait for a female to come ashore and accept his nest. In the process, the male bows his head as the female comes by and watches her rearrange the rocks. He might even offer her another rock to entice her to stay. Quite an interesting ritual. 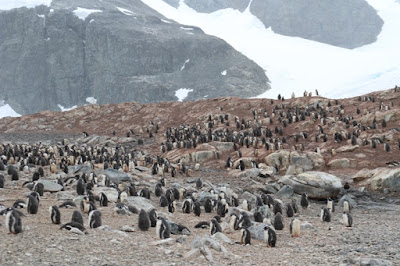 When our ship anchored at Point Jougla, the main attraction was a gentoo penguin colony. It was molting time (February), so many of the penguins were stuffed full because they would not eat again until new feathers came in (two-three weeks). The reason is that penguins are not waterproof during molting, so it’s dangerous for them to go into the ocean to look for food even though they are excellent swimmers. 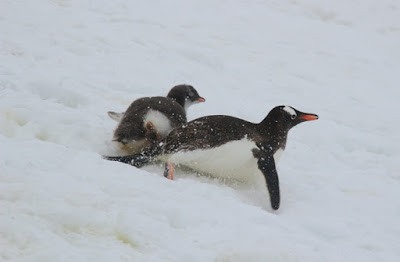 We watched the gentoos for more than an hour as they waddled on the rocks and snow. Many were conserving energy during this fasting time by moving very little. However, when a vulture flew into the colony intent on swooping down on a dead penguin, the others squawked noisily and scattered immediately to protect the young chicks. 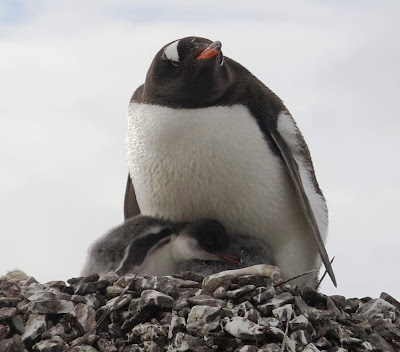 Adelie penguins are the key species on Petermann Island. Some babies were still being protected by mother penguins during our visit. Others were getting feathers and were close to going to sea. We were fascinated by their antics—chasing each other, sliding on their bellies, and testing their position in the social structure of the colony. For example, two penguins ran off from a third who tried to keep up and dejectedly turned back, while the other two playfully scooted down the hill. 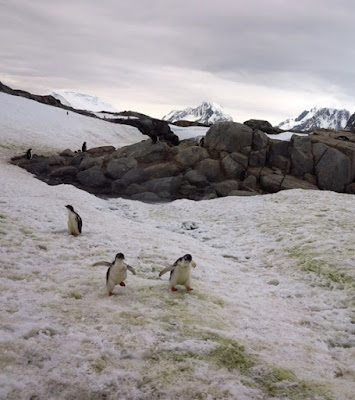 However, as the ocean water warms and ice melts, Adelies have been decreasing in number and moving south, following the food supply. Gentoos are also gradually moving south although their numbers are increasing because they have a more flexible diet. They also feed their chicks longer before going to sea, which results in better survival rates.  Chinstraps, on the other hand, are generally heading north. Scientists tag and track penguins in Antarctica to better understand their movement and the reasons for seeking new territories. 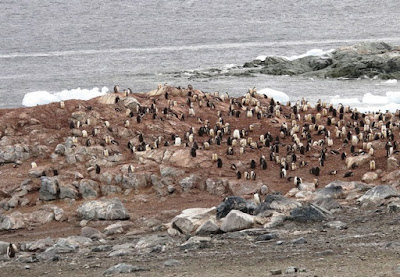 Still we marvel at the ability of penguins to adapt to life on the ice. For example, they fluff their feathers underwater, a technique that releases bubbles that act as lubrication allowing them to move through the water faster. Adaptations like this allow penguins to survive in this generally inhospitable place.
Photos by Larry and Beverly Burmeier


Posted by Beverly Burmeier at 8:00 AM No comments:

As street art and public sculptures gain popularity, there are some that simply capture our imaginations because they defy normal artistic description. Such is the huge metal sculpture in the middle of Chicago’s Millenium Park. 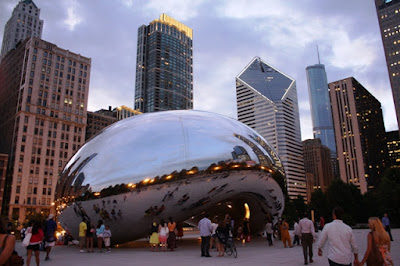 Although its official name is “Cloud Gate,” most people know it as “The Bean.” Shaped like a huge, shining kidney bean, this metal structure that was inspired by liquid mercury stretches across 66 feet of the AT&T Plaza. It throws off weird reflections like a crazy mirror in a carnival.


Created over a two-year span by a British artist who welded 168 stainless steel plates together, the sculpture was unveiled in 2006. Since that time it has become a major tourist attraction in Chicago. Located on the east side of Michigan Avenue, visitors won’t have any trouble finding it. 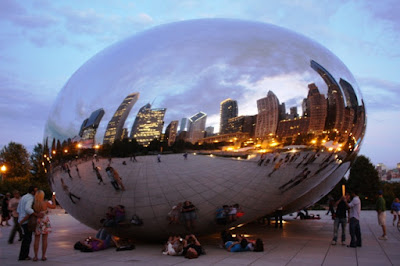 Because of its spherical shape, buildings and people take on a concave reflection in the polished sculpture. Of course, that means kids (and adults) line up to take photos of themselves looking distorted and goofy in the mirror’s image.


Visitors are able to walk around and under Cloud Gate's 12-foot high arch. It’s a fun experience that hundreds, even thousands, do on a daily basis. On the underside is the "omphalos" (Greek for "navel"), a concave indentation whose mirrored surface provides multiple reflections of any subject situated beneath it. To keep it all shiny bright—and remove smudges from curious visitors’ fingerprints--workers wipe the bottom section daily and polish the whole thing two times a year. 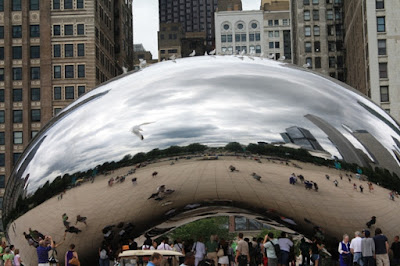 I found it’s best to stand back a bit to take in the full mesmerizing effects of The Bean. In a city known for outstanding architecture, this remarkable piece of public art stands out; it’s just quirky enough for everyone to love while admiring its artistic dimensions. In every sense it truly reflects the heart of the city.

Three more adventures anyone can do 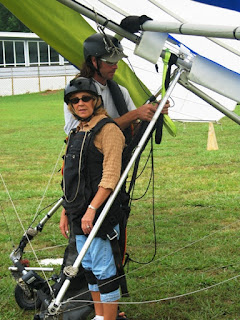 Soar through the clouds, feeling free as a bird while gliding through the sky over Lookout Mountain Flight Park in Chattanooga, Tennessee.  After being strapped into a protective harness, first timers ride tandem with an experienced instructor.


The ride starts when an ultra light plane tows the glider and its two passengers up to 2,000 feet and then releases it for a gradual descent (about 12-20 minutes). Bask in the quietness of air-propelled flight without having to jump off a cliff  while hanging onto the  kite-like structure. 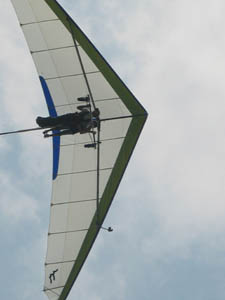 While the instructor maneuvers the craft by catching thermals and wind drifts, you just stretch out and relax for the duration of this magical ride. Floating through clouds gives an incredible sensation of freedom—at the mercy of the winds, yet controllable with body movements.  Too soon, the glider drifts down, and you’re on terra firma again—looking up where you just floated through the sky. 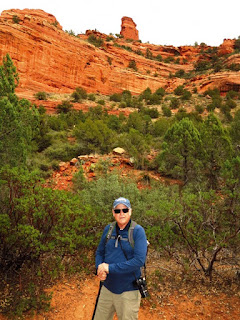 Hiking in the red rocks of Sedona, Arizona 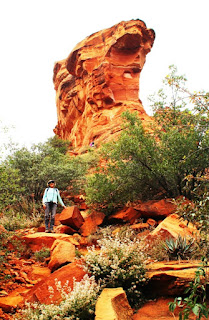 Popular hikes include Bell Rock Trail, a leisurely stair-step climb up and around the prominent bell-shaped landmark. Fay Canyon Trail goes through a gorgeous box canyon to a red rock arch. If you dare, take an exciting walk across Devil’s Bridge, a massive 54-foot-high sandstone arch just inside the Red Rock-Secret Mountain Wilderness. Best not to look down, though 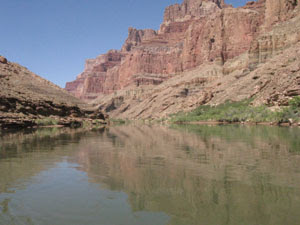 For 10 days my companions and I camped on the banks of the dam-fed river, hiked on narrow ledges and scrambled over jagged rocks, splashed through 160 rapids, bathed in 45 degree water (or  held-out for frolicking in waterfalls), and brushed away blowing sand. 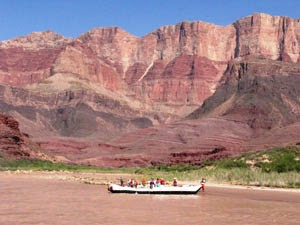 I learned skills I’d never needed before--pitch a tent, go potty in the river, brush my teeth in the dark--put up with daily hat-hair and wet feet, and listened to unfamiliar sounds while trying to snooze. 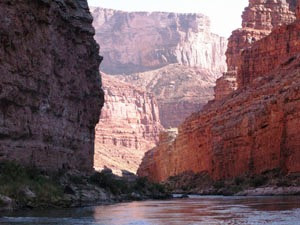 But I discovered, as you will too, that stretching one’s boundaries in order to view spectacularly beautiful and ever-changing vistas of the Grand Canyon's walls--while learning history and geology of the region--were worth any inconveniences.
Photos by Larry and Beverly Burmeier

Posted by Beverly Burmeier at 1:00 PM No comments:

Give your kids a love of adventure and travel

If you have a love of travel and want to pass along a sense of wonder and curiosity to your children or grandchildren, I have a book to recommend. Atlas Obscura:Explorer’s Guide for the World’s Most Adventurous Kid would be the perfect holiday gift for any child or grandchild ages 9-12. 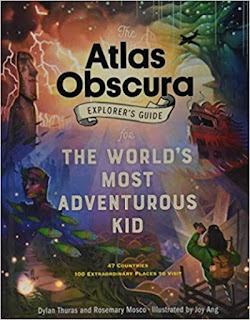 With plenty of pictures and easy-to-understand descriptions of 100 extraordinary places to visit throughout the world, Atlas Obscura (Workman Publishing) becomes a passport to some of the world’s weirdest, exciting, most mysterious, and often obscure wonders. Destinations in 47 countries represent every continent in this incredible journey. GPS coordinates and useful travel advice are also sprinkled throughout the pages, so parents and grandparents may also find themselves dreaming about these fascinating places.


What will young readers learn about? Caves filled with giant crystals seven times taller than a person in Mexico. The hottest town on Earth in Ethiopia and the world’s coldest town in Russia. The massive migration of blue whales through the North Atlantic in Iceland. A hot spring filled bacteria that create rainbow colors in Yellowstone National Park in Wyoming. The planet’s largest ice cave in Austria. A theme park in Malta built on a movie set created for a live-action Popeye film 40 years ago.
Other fun facts that whet one’s appetite for more: Sticky rice was added to the mortar in the Great Wall of China to help glue it together. Don’t pat somebody on the head in Cambodia as the human head is considered sacred.  Until about 8,000 years ago sea levels were lower, and you could walk (rather than swim!) from England to France.


Many kids—and parents, too— will take away a sense of wanderlust, a desire to know more about this wacky and wonderful world in which we live. Information about cultures and history is presented in a fun way and illustrated by beautiful full-color illustrations. Wouldn’t it be great for your favorite young person to start a bucket list of places they’d hope to visit in future years?
Authors Dylan Thuras and Rosemary Mossco, with illustrator Joy Ang, have created a lovely coffee-table book that the whole family can enjoy. The book is available from the website www.atlasobscura.com or at other book sellers including Amazon or Barnes and Noble

Posted by Beverly Burmeier at 3:00 PM No comments: