Should you visit the Skywalk at Grand Canyon West?

September is one of our favorite months to take a road trip. After touring Saguaro National Park in Tucson and playing golf in Scottsdale, Arizona, we headed to the Grand Canyon. Having visited the south rim several times, we chose a different destination this time—Grand CanyonWest. Of course, the big draw there was the see-through glass-bottomed Skywalk that extends out over the deep canyon. 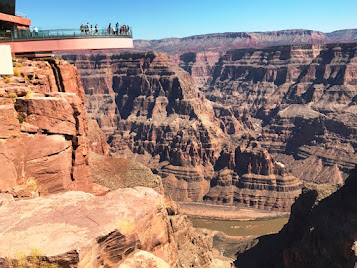 Since the Skywalk is located on the Hualapai NationIndian Reservation, and there really are no large towns nearby, we chose to stay at Grand Canyon Western Ranch, only about 16 miles away, the night before our excursion.

Our drive from Scottsdale was very pleasant as we passed through the Sonoran Desert with scrub brush and the beginnings of hills, canyons, and valleys. We stopped along the way at Grapevine Mesa National Landmark and Joshua Tree Forest and took photos of mountains and a beautiful bluff before arriving at the Ranch. 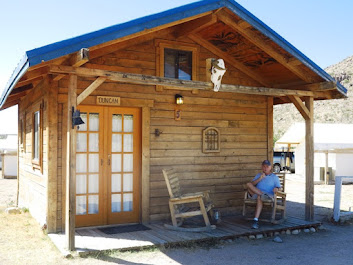 The remotely located Ranch provided a simple cabin that overlooked the imposing bluff we had photographed earlier. A late afternoon walk, cowboy dinner, and singing around a campfire provided a somewhat “authentic” look at life in the desert. 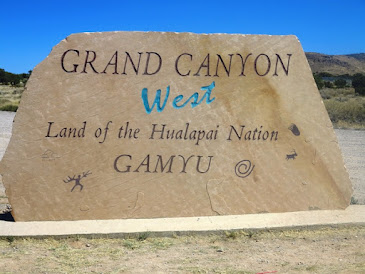 The next morning we arrived early at the Skywalk, parked, and rode the shuttle to visitor areas. The first stop for the shuttle was at Hualapai Ranch, and old-time Western town with horse riding, zipline, gift shop and restaurant. We skipped this in order to get to the Skywalk before crowds came. 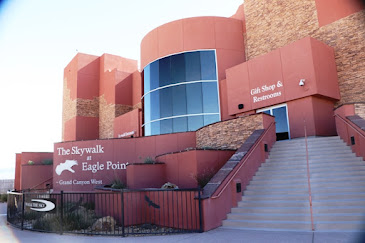 What an amazing structure this is! The ten-foot wide horseshoe-shaped walkway is constructed of three-inch thick plexiglass and lots of supporting steel. On this bridge you can look into the canyon 4,000 feet below to see the Colorado River, multi-colored strata, craggy precipices, and huge walls worn smooth by wind and water. It’s a geological marvel revealing millions of years of evolution. 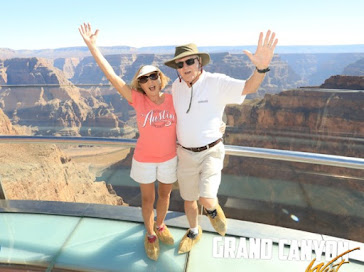 We walked back and forth over the semi-circle taking in the marvelous views. I longed to have a camera, but visitors are not allowed to take anything onto the Skywalk. So we engaged the professional photographer to record this incredible experience. Looking down into the canyon provides a different perspective that we found insightful, although it might not be enjoyable for anyone afraid of heights. 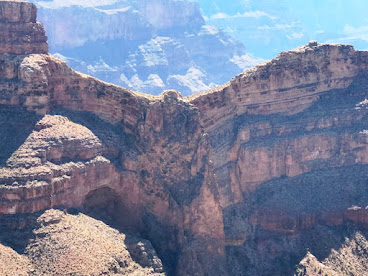 Also at this site is a natural  photo-worthy formation resembling an eagle with spread wings that has been named Eagle Point. About noon we took the shuttle to Guano Point and hiked to the spot where a cave with bats was found years ago. A cable car was constructed to transport bat guano, which was used for fertilizer. After an Air Force jet damaged the cable car, it was never repaired. 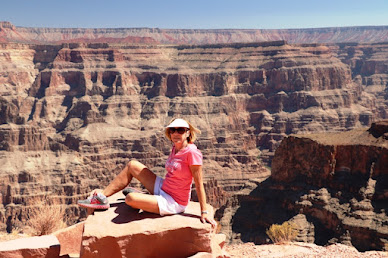 We spent almost two hours walking along the canyon rim, soaking in excellent views of cliffs and river below. Rock formations in the area were simply made for climbing, so I scrambled to the top of one large formation while trying to follow an elusive trail. After descending at the other end, it took awhile to meet up with Larry again. He had been recording this geological history of the Earth as revealed in the rocks and cliffs with his camera.

While the Skywalk is worth doing because of its uniqueness, overall the Grand Canyon never ceases to amaze. It’s one of our favorite places because of the variety of scenery, changing colors throughout the day, the immensity of the canyon, and remembrances of our raft trip on the Colorado River below.

As frequents visitors to and avid supporters of our national parks we contribute to several organizations whose missions involve improving the park system as well as individual parks in the U.S. In recent years funds have been cut which means staffs are smaller and maintenance issues must often wait for years.

But U.S. National Parks have become even more necessary and more visited in 2021 as families re-emerge into tourist mode. National parks are seeing an influx of people arriving this summer, which has resulted they saying that we are “loving the parks to death.” The resulting creation of a reservation system has provided an additional layer of protection in some of the most popular parks.

Having enjoyed these parks without such restrictions, I wanted to understand how the parks came to be and how future parks might be created.

History of the National Park System

In 1864, President Abraham Lincoln signed the Yosemite Grant, and for the first time, the federal government set aside parkland for preservation and public use. Protecting Yosemite Valley paved the way for the creation of all our national parks.


The movement then took off with establishment of  Yellowstone National Park, the first national park, which was established by an act of Congress in 1872 "for the benefit and enjoyment of the people.” You’ll see that phrase carved in Roosevelt Arch at Yellowstone. The park was placed under control of the Secretary of the Interior.

And in 1890, largely due to community activism, the Yosemite Valley was officially protected as Yosemite National Park. Amazingly, these acts began a worldwide national park movement. Today more than 100 nations have established 1200 national parks or equivalent preserved.

By 1916, Congress had designated numerous national parks and monuments, many of them carved from the federal lands of the West. The Department of the Interior was managing a large portfolio of protected landscapes across the country but had no official or unified leadership. Other natural and historical sites were still managed by the War Department and the Forest Service.

President Woodrow Wilson signed the act creating the National Park Service, which would have the responsibility to protect the 35 parks and monuments then managed by the Interior Department as well as any yet to be established. The National Park Service was given the charge to “conserve the scenery and the natural and historic objects and the wild life" in these special places.

In 1933, by Executive Order, 56 sites were transferred from the Forest Service and the War Department to the National Park Service, expanding the park system in recognition of the historical, scenic, and scientific significance of these areas, deserving of special protection.


Additions to the National Park System are now generally made through acts of Congress, and national parks can be created only through such acts. But any president has authority, under the Antiquities Act of 1906, to proclaim national monuments on lands already under federal jurisdiction.

The National Park Service still strives to meet its original goals, while filling many other roles as well: guardian of our diverse cultural and recreational resources; environmental advocate; partner in community revitalization, world leader in the parks and preservation community; and pioneer in the drive to protect America's open space.

Posted by Beverly Burmeier at 12:52 PM No comments:

If you plan to visit Aspen, Colorado in the summer or early fall, there’s one place you simply must put on your to-see list. But it’s not as easy to get to as in previous years, so plan ahead and make a reservation as far in advance as you can.

From spring until October (May 14-October 24 this year), visitors crowd into the Maroon Bells Scenic Area, about 12 miles from Aspen, hoping to catch perfect mirrored reflections of the twin peaks on Maroon Lake. It’s a gorgeous sight that will have you clicking picture after picture on your camera.

There’s a $10 fee for driving Maroon Creek road to the Maroon Bells trailhead before 8 a.m. and after 5 pm. Parking is very limited, so most visitors take a 15-minute shuttle bus ride from Aspen Highlands to the trailhead. There is a fee for parking at the lot, and reservations are required, especially since the number of people on each shuttle run is limited. But, don’t let the details discourage you. Whatever it takes, the effort is definitely worth it. 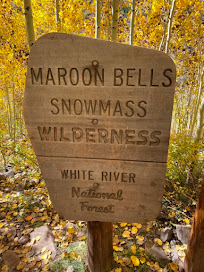 Maroon Bells are two “fourteener” peaks in the Elk Mountains, Maroon Peak and North Maroon Peak, each more than 14,000 feet high. Unlike other mountains of the Colorado Rockies, which are composed of granite and limestone, both Maroon peaks are hardened mudstone whose distinctive wine hue gives the peaks their name.

The Maroon Bells themselves are located in the wide Maroon Bells-Snowmass Wilderness of the White River National Forest. The whole Maroon Creek Valley is surrounded by beautiful mountains, and the views are as spectacular as anywhere in the world, especially early morning.

When you arrive, you can simply stroll around to enjoy the indescribable beauty of the area. Walking an easy trail of less than one mile that highlights the iconic calendar-quality mountain reflections and aspen groves or just sitting by the lake can be very relaxing. In early fall, the golden groves shimmer in the sunlight as loose aspen leaves float to the ground.
Another option is to walk the easy three-mile Scenic Loop Trail. Enjoy flowing cascades of Maroon Creek year round, wildflowers in summer, and possible wildlife sightings in early morning or evening.

For the more adventurous, Crater Lake Trail offers a little more challenge. Called a moderate hike, this trail is about 3.6 miles round trip and winds its way through meadows, aspen forest, and scree fields. The trail can be extremely rocky, so be sure to wear sturdy shoes; walking poles can be as asset to help with balance on uneven surfaces.

Eventually the trail leads to Crater Lake, situated in a basin, which has been somewhat dry on both our visits. But there are incredible views of the Maroon Bells—and lively chipmunks for entertainment—before heading back to Maroon Lake. 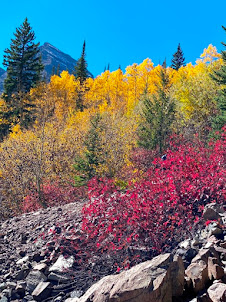 This is one of our favorite hikes because of the jaw-dropping views all around. Just allow enough time to have a snack and rest at Crater Lake before hiking back. Enjoy multiple colors whatever season you are there.

After returning to the starting point, you’ll want to take a final look at your surroundings (note how the different angle of the sun affects your photos) and then catch the shuttle back to your car. Leave early in the morning (before 8:00 is ideal), and plan on this adventure taking most of a day.

Posted by Beverly Burmeier at 2:24 PM No comments: