After driving from the Big Island’s dry southeast shore through volcanic dunes, created when fine sand blown by trade winds piles up, we begin to appreciate the unique topography of this youngest and largest of the Hawaiian islands. Unlike Kauai, which has had millions of years to stabilize (no volcanic eruptions) and bloom into a tropical paradise, the Big Island of Hawaii continues to evolve.
Five volcanoes make up the land mass of the Big Island. Kohala on the northern tip is the oldest; Mauna Kea at more than 13,000 feet is the tallest, and Mauna Loa is the largest by sheer volume. An active volcano, it erupts about every 25 to 50 years (last eruption was in 1984). Kilauea, home of legendary volcano goddess Pele, has been erupting continuously for more than 30 years with new lava flows that started in summer 2014 threatening to devour more roads and homes.


This landscape was recognized for its historic and geologic significance and became Hawaii Volcanoes National Park, the United States’ 13th national park, in 1916, even before Hawaii was a state. 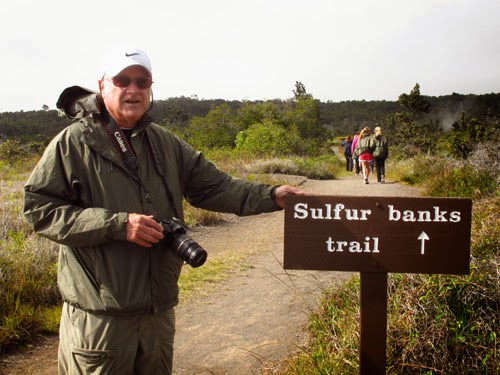 Our tour arrives at Jaggar Museum, and we observe glowing displays of red-hot lava in the crater there.  We walk steamy Sulfur Banks Trails filled with craters bubbling up strong- smelling sulfur dioxide gas. Then we drive the winding Chain of Craters Road where magma swells and forms a rift along which eruptions occur.  A 36-mile round-trip drive, Chain of Craters Road descends 3,700 feet to the coast and ends at a 2003 lava flow.


The caldera is easily accessible by car, which provides an excellent opportunity to see flowing lava. Since the lava’s path changes constantly, check with the Kilauea Visitor Center to get the latest report on where to see this.
Nate, our guide leads us to a remote area where we walk carefully on what resembles a moon scape, dusty and drab and jagged, to see the aftermath of the eruption of Mauna Ulu. Hills and small craters cover the area, and it’s very windy and chilly in late afternoon. But it’s such an unusual scene that we are glad to experience it. Spotty patches of vegetation creep in ridges as plant life adapts to this most improbable place. Even where it’s dry, the so-called fog drift provides much needed moisture.


At sunset, Nate drives to his secret place where we dine in semi-darkness. He has planned a treat and invites us to follow him down a path, clutching flashlights and jackets against the night chill. Many tourists go to Jaggar Museum to witness what we see close-up in the dark sky--a brilliant red plume rising from the ground. We’re standing beside an active lava display, all the more spectacular for the darkness that surrounds us--—the crowning glory of our tour .
The gate to Hawaiʻi Volcanoes National Park is open 24 hours every day. There is only one entrance to the park as the eruption from Kilauea from that began in 1983 blocked the other entrance. Since the eruption continues today, the road hasn’t been repaired leaving a 10-mile gap where vehicles cannot drive.

Check on updates from the summer 2014 eruption. if you plan to visit

Posted by Beverly Burmeier at 9:49 AM No comments:

Exploring volcanoes that shaped the geology of Hawaii's Big Island


﻿
We hear about volcanic eruptions in Hawaii and marvel at the fiery red molten lava that threatens to destroy homes and property. But the fact is that eruptions have been continuous for more than 35 years in Hawaii Volcanoes National Park on the Big Island. The thought is hard to comprehend until we start a tour from the dry, rocky side of the island to the more tropical and humid coast.
We meet few cars on Saddle Road (Hwy 200), a deserted span that cuts across the middle of island instead of following the coastline. Brown tufts of fountain grass pop up along the road with a few mesquite trees scattered around. The ground is covered with remnants of past volcanic activity.This is mostly ranch land with tradewinds blowing across the island that shake our van.

﻿
The entire Hawaiian Island chain was created by volcanoes, which still fill the ocean for 18,000 feet below the surface. When there’s a hole in the earth’s crust, heat comes up from the mantle causing lava to dribble out rather than blasting the top off. The entire Big Island is a hot spot with a constant flow of lava in what is now the protected park.
As the youngest island in the chain, Hawaii is made up of five volcanoes that are constantly changing. Mauna Loa, an active volcano that last erupted in 1984, is the largest mountain in the world by volume. Even though only the tip is visible above water, it makes up 60 percent of the island.

﻿
As we enter the national park our guide explains that we’re going back to the birthplace of the islands. Our first stop is a lava tube, a cave-like structure that we can walk inside. In its natural state with rocks, dripping water, and slippery algae, we’re give flashlights to maneuver  through the dark.
Our guide explains that there are two types of lava—a smoother, spongy variety and craggy volcanic rock that is as sharp as a Brillo pad. At Huaka Crater we hike a bit off the beaten path and experience this type of lava—it sounds like walking on glass and can cut if you happen to fall on it. This deep crater contains rocks as large as automobiles at the bottom that were offered as gifts to Pele, volcano goddess to whom Hawaiians believe they owe the very existence of their island. We see a curiosity, a lava tree: Lava from the 1979 flow surrounded the trunk causing the tree to die but leaving a perfect, empty mold.

Tips for staying healthy when traveling to high altitudes

If your vacation plans include hiking, biking, or fishing in mountains or a part of the world that is higher elevation than your normal home situation, be prepared for altitude sickness. With less oxygen in the air, symptoms of headache or dizziness may start to appear at about 8,000 feet elevation, although altitude or mountain sickness can occur even lower in susceptible people.
Acute mountain sickness (AMS) is the most common type and causes symptoms similar to those caused by an alcohol hangover, usually within a day or so of arriving at a higher altitude. Symptoms may include headache, tiredness, lightheadedness, loss of appetite, trouble sleeping, and nausea.


For the 25 to 40 percent of people who get mild symptoms of acute mountain sickness, Dr. Eric Johnson, globally recognized expert on high-altitude medicine, says to rest and stay where you are until you feel better. “Do not  travel or climb to a higher altitude until all symptoms resolve.  Moving to a lower altitude can also help if symptoms do not go away in a day or two,” Johnson adds.
The good news, especially for people with limited vacation time, is that a common over-the-counter medication—ibuprofen—could help reduce the symptoms.  A study by the American College of Emergency Physicians reports that people who took ibuprofen before, during, and after an ascent were far less likely to develop symptoms of AMS.
“You don’t want to feel horrible for 15-20 percent of your vacation,” says Grant Lipman, MD, whose research at Stanford University corroborates the effect of ibuprofen.

More serious than acute mountain sickness are high altitude cerebral edema (HACE) and high altitude pulmonary edema (HAPE), both of which are less common but require descending to a lower altitude immediately. HACE involves swelling of the brain and results in trouble walking normally, extreme weakness, confusion, and/or irritability. HAPE involves fluid build-up in the lungs and may not show up for two to four days. Symptoms include coughing, feeling breathless, and trouble walking uphill. If symptoms are severe, get medical attention immediately.

﻿
For any type of altitude sickness, breathing supplemental oxygen, if available, can provide quick relief. We’ve found that  hotel staff in high altitudes commonly supply oxygen in tanks for guests. Having experienced mild AMS myself, I know that this is often sufficient to relieve symptoms.
Prescription medications used under a doctor’s supervision can help prevent and treat mountain sickness.
Prevention is best, of course, so give your body time to adjust. Avoid moving quickly to high altitudes; plan to stretch out ascending over several days.  If you are hiking, biking, or climbing, avoid difficult physical activities for the first few days. When hiking to a higher altitude during the day, go back to a slightly lower altitude for sleep each night.  Skip alcohol and sleeping pills. Most likely your body will adjust if you allow enough time, so you can enjoy your travels.