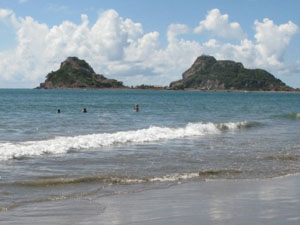 A year ago we cruised along the Mexican Riviera stopping at multiple ports along the Pacific coast of Mexico including Mazatlan, the busiest port between Los Angeles and the Panama Canal. It has been a favorite stop for cruise ships as well as tourists looking for an authentic Mexican destination. From Stone Island (really a peninsula), we boated to nearby Goat Island and kayaked around Kaktus Island.  Sunshine, golden beaches, and calm blue water made this a very pleasant excursion.

So, it was disheartening to learn that, for safety reasons, ships in the Holland American Line have recently  discontinued stops at Mazatlan for the remainder of the spring 2011 season.  HAL isn't the first cruise line to cancel port calls to Mazatlan, a decision that has resulted from shootings in the tourist zone of the city.  Disney canceled 27 ports of call in Mazatlan for 2011, and Carnival is considering a similar move. "There have been recent security incidents that have made cruise lines concerned about the safety of their guests," Carnival spokesman Tim Gallagher said. 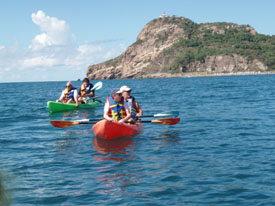 Last year 526,000 passengers visited the port without incident, but crime concerns are hard to overcome. It's a shame that drug-related violence is negatively affecting tourism, an important economic factor for the city and country. Still, Port Director Gil Diaz claims the port of Mazatlan is safe and  incidents such as stealing a passenger's necklace are minor things outside the terminal.  But you can't blame cruise lines for not wanting to take chances.

As for HAL, some sailings will now feature two days with an overnight in Puerto Vallarta or extra time in Cabo San Lucas. Hopefully, discussions with local authorities will enable ships to resume calling at Mazatlan in the near future.
Photos by Larry and Beverly Burmeier
Connect and read more at: Stripped Pot   Austin Adventure Travel   LinkedIn   Twitter   Facebook
Posted by Beverly Burmeier at 8:38 PM