Olympic National Park in Washington is filled with myriad wonders. It’s a huge park at almost a million acres—really three parks in one with diverse geography encompassing mountains, seashore, and rain forest.  That was enough to entice us to visit last September, and our discoveries of nature in this splendid place remain as cherished memories. 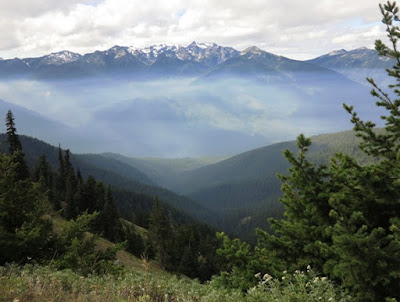 My husband Larry and I and friend Deb flew from Texas to Seattle, rented a car, and started our road trip that would also include Mt. Rainier National Park. Our destination the first night was Port Angeles, which would be our kick-off point for the first part of the journey—in the massive Olympic Mountains.


Hurricane Ridge is the iconic feature that everyone wants to visit, so naturally Hurricane Ridge Road is the most popular scenic road in the park. That was our destination on arrival—and the must-see spot if you only have one day to spend there. 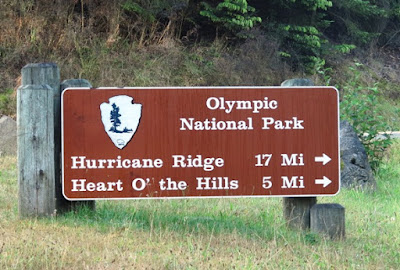 A visit to Hurricane Ridge Visitor Center at the edge of Port Angeles, the nearest city to the national park, gave us an overview of the topography. Then we drove for 20 miles where the road curved and climbed into a mountain zone and then into a sub-alpine region at 5,000 feet.


The first 10 miles or so featured tall Douglas fir trees before adding silver fir, western hemlock, and western red cedar. As we gained elevation, the trees became sorter and clumped together more in a thick forest.  Although some wildflowers were still blooming, we were past prime time (mid-summer) to see paintbrush, lilies, and heather in open meadows.
That was a quick trip, but two days later, when the persistent fog had cleared, we returned to Hurricane Ridge to take a couple of hikes. Near the visitor center, we first tackled the short but uphill trek to Sunrise Point. At the top of the hill views of mountains and landscapes were enveloped in a residual haze from forest fire smoke. 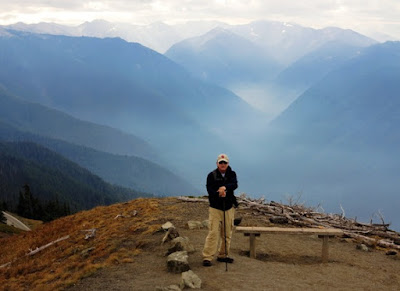 After a snack at a picnic area (gotta fuel up for the next trek!), we rounded out the morning with the Hurricane Hill hike—3.2 miles round trip on an uphill path with elevation gain of 700 feet.  The path was well-maintained and paved at the beginning, but it became quite steep as it traveled to (and past) the tree line, ending at 5757 feet, the highest accessible point in Olympic National Park. 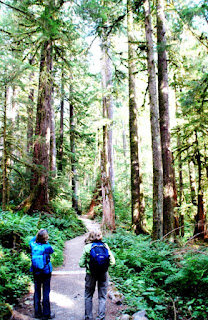 During the last mile switchbacks lead to the summit, slowing down our pace a bit. Of course, taking time to enjoy spectacular views of Port Angeles and the ocean beyond also gave us time to catch our breath. Although the day was sunny and pleasant with temperature in the 60s, the gauzy haze affected our ability to see more of the Olympic Mountains. Had we known exactly where to look on a clear day, we might have recognized Vancouver Island, the Cascade Mountain Range, Seattle, and Mt. Rainier.


Although we  watched for grazing deer, the only wildlife we saw was one marmot. Still, it was a fun hike that took a little over two hours to complete—not bad considering how often we stop to take pictures. During the following week we experienced more of Olympic's dynamic landscapes and understood completely why it was named a national park in 1938 and attracts so many repeat visitors.
Photos by Larry and Beverly Burmeier
Posted by Beverly Burmeier at 7:30 AM