It’s a place where time stands still. Nature is the only determiner of hours passing. And time does pass quickly, even if you’re doing nothing. Which is precisely what makes the Seth Peterson cabin designed by Frank Lloyd Wright a special place.
We arrived at the historic cottage on Mirror Lake in the Wisconsin Dells on a sunny September afternoon. But by nightfall serenity had taken hold and my husband mused, “It seems like a long time ago since we left our home in Austin.”


The peaceful setting has that effect on visitors. Surrounded by huge oak, pine, and maple trees this cabin in the woods offers privacy and tranquility. Situated on a bluff 60 feet above the placid lake, the cabin was designed to meld into its surroundings, blurring the boundaries between indoors and outdoors.
Built of native sandstone, plywood, pine, and glass in the style first developed by the renowned architect in the 1930s, the cabin is the last Wisconsin building designed by native son Frank Lloyd Wright before his death at age 91. It was commissioned by Seth Peterson, a 24-year-old government computer operator in Madison, Wisconsin, who aspired to be an architect in the mold of the master.


Building the cabin
Construction on the cabin started in 1959, but before it was finished Wright died, and Peterson’s personal and financial troubles led him to suicide.  Neither saw the cabin completed, but it was finished in 1960 by a second owner. Eventually coming on hard times, the cabin was neglected for nearly two decades before the Department of Natural Resources bought the cottage as part of Mirror Lake StatePark. 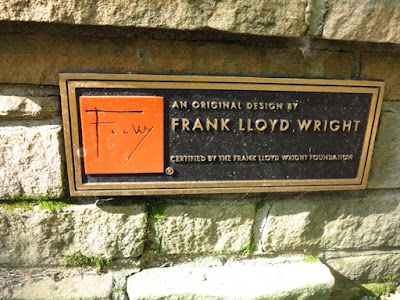 Built with entire walls of windows, the 880-square-foot, one-bedroom cabin seems much larger. Its open floor plan, with the main living area surrounded by glass, brings nature into the room at every angle. Floors are constructed of unpolished stone, walls are made of terra cotta bricks, and ceilings are all wood panels. No matter where I stood in the house or which way I turned, I felt that the view was planned to be in harmony with nature.
As our stay continued, I noticed details of the structure that took awhile to absorb: Recessed lights framed by natural wood, so they blend into the ceiling; a glowing fireplace that spread light and warmth throughout the living room; Wright’s signature geometric motifs decorating windows; and furniture designed by the architect to work perfectly within the spaces he created.


We also discovered two pennies set almost invisibly into different locations on the stone floor—a mystery we have yet to unravel.
Wright’s well-known angled wall design is also incorporated into one of the cabin’s exterior glass walls. The structure is a study in classic Wright architecture--but an accessible piece that visitors can actually become part of while living briefly in this creative icon. Sitting inside looking out the window at birds approaching the feeder or sitting on the outside deck (covered with falling autumn leaves) watching an occasional squirrel scamper by, it’s easy to get lost in the timelessness of this place.
﻿

Restoring the cabin
Contemplation also makes the visitor grateful for the Seth Peterson Cottage Conservancy, the organization formed to restore and operate the cottage. When restoration began in 1989 much of the glass was broken or missing, and there was massive water damage to the flat roof over the bedroom and part of the slanted living room roof. Fortunately, the masonry walls and stone floor were still in good condition. Today the cabin is an inspirational memorial to the man who had an indelible influence on architecture in America.


And people like me are able to marvel at this original Wright structure because the Conservancy devised a plan to help finance the restoration—rent it out to the public. Getaways have proved so popular that it’s not uncommon for certain dates to be rented two years in advance (We booked our stay almost a year ahead).
Exploring the lake


Soon after arriving I spied a path leading from the cabin down to Mirror Lake. At the path’s end I found a bright green canoe and small wobbly dock from which we could launch the canoe. Back at the cabin I shared my find with Larry. After locating paddles, life jackets, and the key to unlock the canoe’s chain, we hustled down the leaf-covered trail to start our water adventure.
Suddenly a strong wind blew in, the kind that portends a storm (we knew rain was predicted for the next day). We decided to go anyway, and for more than an hour we paddled through the narrow channel that led into open water. Large striated limestone cliffs guarded the channel until we reached open water. Shaded by trees on both sides, the channel gifted us with glorious reflections when the sun peeped through.
It did rain but not for long, and the wind calmed, so we didn’t have to paddle against it on the return.  We arrived back to the cabin just before sunset and vowed to explore by canoe even further the next day. But first, we wanted time to appreciate our surroundings.
With no television or internet, the cabin becomes the perfect place to soak in the ingenuity of its creator. Even better, staying there gave us back the precious commodity of time—time to relax, refresh, and reflect on our lives and our surroundings.

Posted by Beverly Burmeier at 12:24 PM