This is the second of a two-part series (read the first blog) about different kinds of Peruvian handmade crafts and world-class folk art, many practiced since pre-Inca times and inspired by lasting traditions. 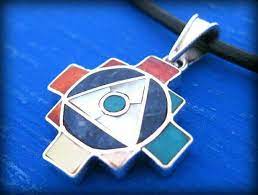 Considered sacred in the Inca culture, the Chakana, or Inca Cross, is a popular design motif found throughout Peru — from ancient archaeological sites to stonework, pottery, and textiles to beautiful jewelry pieces. Silver Inca cross pendants, rings, earrings, and more may be inlaid with colorful stones or shells. It’s geometric shape has deep spiritual significance for the Quechua people. Its center circle represents the Inca imperial capital of Cusco as well as the Southern Cross constellation. 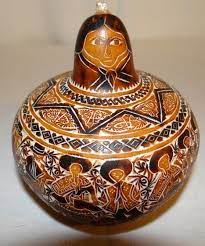 The traditional Peruvian art form of carved gourds, or mates burilados, dates back more than 4,000 years to pre-Inca societies. In ancient times, they had ceremonial and practical purposes. Today they are primarily decorative with carvings depicting scenes of daily life or stories from history and mythology. Commonly made in Peru’s central and southern Andes mountains, these artifacts use the dried, hard-skinned rind of the gourd as a canvas. Craftsmen, or materos, hand-etch, dye, and acid-burn designs into the gourd to produce a range of colors.

Considered Peru’s folk art and handicraft capital, the town of Ayacucho in the central highlands is one of the country’s key pottery centers. Using the local red- and cream-colored clay adorned with brown and white paint, artisans produce small handmade churches inspired by the town’s own 33 churches, one for each year of Jesus’ life. 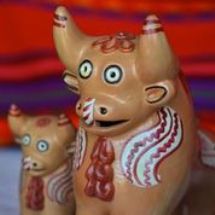 Bulls of another sort originate in the Puno region near Lake Titicaca. The iconic torito de Pucará is an intricately painted ceramic bull figurine often used for ceremonial purposes. Originally made as a ritual element during the cattle-branding ceremony, these figurines are believed to bring prosperous harvests, livestock procreation, happiness in marriage, and household protection. Throughout much of the Andes, you’ll see a pair of bull figurines straddling a cross cemented on rooftops for protection.

Deep in the Peruvian Amazon, the indigenous Shipibo-Conibo people are well-known for elaborate maze-like designs, known as kené, that adorn their clay pottery. These delicate geometric lines, in shades of brown and ochre, are inspired by the natural environment and rooted in shamanistic visions and native cosmology. Intricate designs are created freehand predominantly by women. Shipibo pottery is distinct from that made in the rest of the country because the style of baking in an open fire pit means the walls of the pieces are thinner and the earthenware pots and bowls are more delicate.

The Peruvian highlands produce hauntingly beautiful music, thanks to a variety of unique native instruments. Displaying indigenous, Spanish, and African influences, they range from flutes and panpipes to guitars and drums. The most famous of these is the traditional Andean flute, or quena, a hollow reed with one thumb and six finger holes. Just as distinctive is the zampoña, also called a siku, a traditional Aymara panpipe made of different-length reeds bound together in a flat or slightly curved shape. 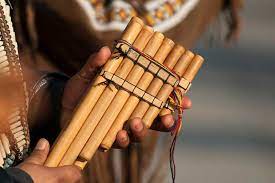 Rounding out the baleful sound is the charango, a 10-stringed instrument in the lute family invented by the Quechua and Aymara people of Peru. Originally made of armadillo shells, charangos are now more commonly crafted from wood. Finally, traditional drums include the six-sided box-shaped cajón and the cylindrical bombo drum. 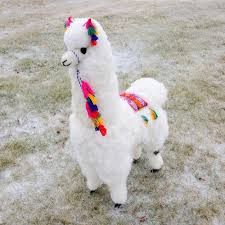 With llamas so ubiquitous in the Peruvian Andes, it’s no surprise that they turn up as adorable woolly figurines. An important pack animal and source of wool for the Incas, this native camelid typically appears as a white fluffy stuffed animal adorned with a halter, saddle bags, or pom-poms and in multiple sizes from keychains and Christmas ornaments to teddy-bear like toys.