One of the best ways to travel in Alaska is by ship. Visions of massive blue glaciers, misty snow-capped mountains, and dog sleds may come to mind. But don’t forget about the wildlife. From bears to birds, wildlife can be found literally everywhere in the state. If you want to see more than just coastal inhabitants, consider a land extension, either before or after the cruise, that will provide additional views of this large state and its diverse wildlife. 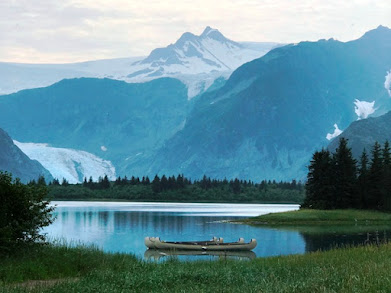 Winter is the perfect time to start planning your Alaska cruise. All major cruise lines that sail from the U. S. provide a wide selection of cruise lengths, dates, and options. Sailing the Inside Passage is a favorite itinerary of cruisers, so let’s look at a variety of wildlife that you can see either from the ship or when exploring on shore. 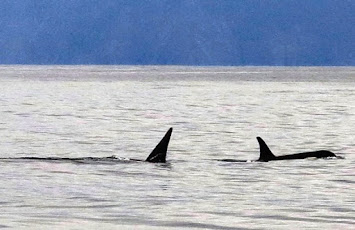 Look for orca whales, largest member of the dolphin family. They roam in pods throughout the cool waters of southeast Alaska but are not as prevalent as humpback whales. Being somewhat social, their black and white bodies make them easy to spot on a cruise, especially if you have binoculars and are willing to scan the sea from time to time.

Look, also, for dophins and porpoises, which frequent shallow coastal waters and are commonly seen throughout Alaska’s bays. These playful creatures seem to enjoy showing off for spectators—who absolutely love their acrobatic maneuvers. 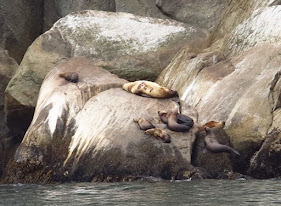 Passing a beach, sandbar, or ice floe near Alaska’s coast? Look for harbor seals. You might glimpse a brown head peeking out of the water as they swim gracefully from one hang out to another.

Sea otters also can frequently be seen lounging on chunks of ice or floating on their backs in the waters of Southeast Alaska. Watch them tumble and dive in the water and use paws to groom themselves. These playful furry creatures are especially abundant in water near fjords. 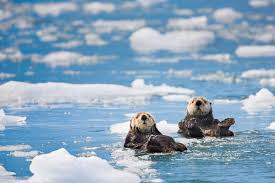 If you venture into Prince William Sound or Glacier Bay National Park, you might see humpback whales. These massive creatures spend warm days in the cooler Pacific Ocean around Alaska. After bulking up during the summer, in winter they migrate to seas near Hawaii where they can be spotted later in the year. Notice how the pattern on each fluke is different—a sort of fingerprint for the humpbacks. 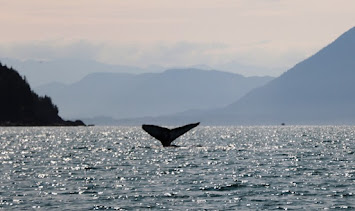 Along the way, be on the lookout for bald eagles gliding in the air. They are surprisingly available, which is a thrill for anyone wanting to see our national bird in the wild. Watch as they swoop down to catch fish and then soar overhead back to large nests in trees along the shore. 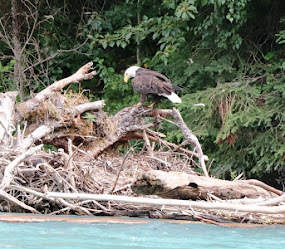 Many port excursions are designed especially to see various types of wildlife, Local guides can increase your chances of spotting various fish or fowl. From remote areas to bustling cities, Alaska has much to offer any traveler. Don’t forget to bring your camera!

Posted by Beverly Burmeier at 5:46 PM