A few years ago Larry and I took a cruise that stopped at ports considered Baltic states. The largest, Lithuania, lies on the eastern shore of the Baltic Sea. It is surrounded by Latvia to the north, Belarus to the east, and Poland to the southwest.

Because of their strategic position on the sea and close proximity to Russia, the three Baltic countries--Latvia, Lithuania, andEstonia--are closely watching current events unfold.  Yes, our cruise was years before Russia decided to bully its way into neighboring Ukraine. Daily news updates brought back memories of our visit, so I’d like to tell you a little about what we experienced in Lithuania.

In the 14th to 16th centuries Lithuania was a powerful empire that dominated much of eastern Europe. Today it has an advanced economy and is quite prosperous. It is not part of Russia. However, in the 1940s it was occupied by the Soviet Union, a situation that was contrary to international law and not recognized by most democratic countries. Lithuania became independent in 1990 and is an active member of the European Union and NATO.

Lithuania is famous for its landscapes, flatlands, abundant forests, and lakes. Amber is found there, along with charming seaside towns with sandy beaches. We took a forest tour showcasing the capital city of  Klaipeda’s world of fairy tales and legends and were charmed by the country’s with a magical history. 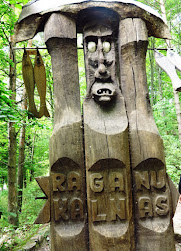 After crossing the Curonian lagoon to the CuronianSpit, we visited Witches Hill, a park that features 80 sculptures carved from oaks along the edge of a path. Seventy percent of the Curonian Spit is forest with lots of wildlife and beautiful old-growth trees and paths leading in various directions.

Our guide entertained us with tales about the giant Neringa, Egle the queen of grass snakes, a dragon slain by the prince, thunder, and witches performing their devilry. Sculptures representing these stories are a favorite attraction that we came to see in the park.


After walking through the forest, we visited a gallery that made and sold weather vanes. During the 19th century these became artistic symbols used as a marking system by fishing boats to show that they were fishing in legal waters.

Amber is found at the bottom of the Baltic Sea and has been mined on the Spit since the late 19th century. It's beauty shines like sparkling gold. As a reminder of our visit I purchased several pieces of amber jewelry at a local store. And who could resist a hand-knitted cotton sweater made by a vendor at a local fair (not me)? 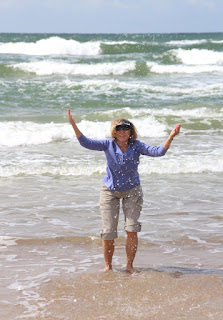 At the water's edge, I tramped over dunes and through honey-colored sand on the beach. So, of course, I rolled up my pants legs and waded into the cool waters of the Baltic Sea--another fond memory of our visit to this proud country that was once the largest state in the entire continent of Europe.