This may be the world's most scenic drive

One of the highlights of our recent visit to Norway was driving on the Atlantic Ocean Road. Although it’s just over five miles long, the winding highway took us through beautiful countryside where the ocean washes against the northwestern shores of Norway. 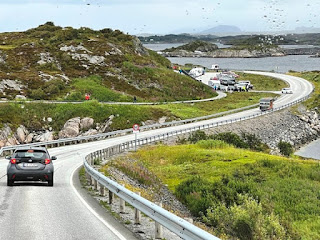 Called “the world’s most scenic drive,”  by a British newspaper, the Atlantic Ocean Road (Atlanterhavsveien) connects the towns of Kristiansund and Molde, the two main population centers in this part of Norway. Both of these cities were port stops on our recent cruise, so we got to see this amazing structure from both ends. 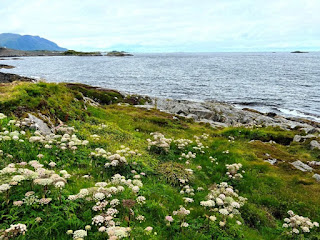 Named “Norway’s Construction of the Century” in 2005, the Atlantic Ocean Road links charming villages and zigzags across eight bridges as it skips from island to island. Because of the spectacular scenery, it has become a popular site to film automotive commercials. 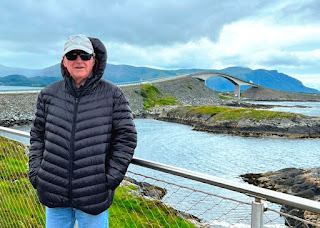 Although the Road has become very much of a tourist attraction, that wasn’t the initial purpose. It replaced a ferry that was less than ideal for transporting people in this region. After gas and oil were discovered in the late 1970 and 1980s in Norway, many roads and bridges were built. Construction on the Atlantic Road took from 1983 to 1989. It was financed by public grants and tolls. By June 1999 the road was paid off and the toll removed, so the road is now free for travelers. 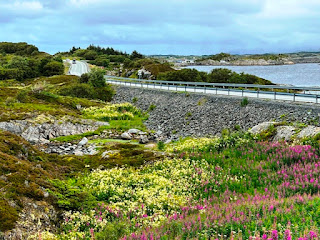 At one point along the Road, there is a visitor center that features a café, informational posters, and a paved path with outstanding views of the Road. Larry and I walked on this path to get a better feel for the Road than when riding in a vehicle on it. We also admired one of the outstanding bridges that cross the ocean on this Road. 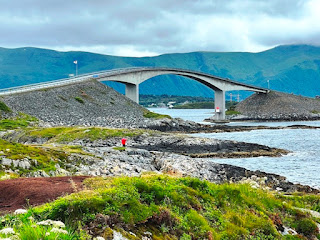 The day we visited was quite chilly and blustery, so we hurried along the path. But we were pleased to see colorful purple and white flowers blooming and rocky outcrops added variety to the landscape. A memorial to sailors who had lost their lives at sea added a bit of solemnity along the route. 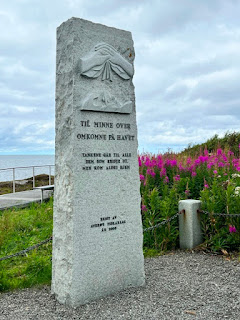 Today the road is preserved as a cultural heritage site. It is classified as a National Tourist Route, something that was inevitable given the nature of this stunning location and its natural beauty.

Posted by Beverly Burmeier at 2:43 PM