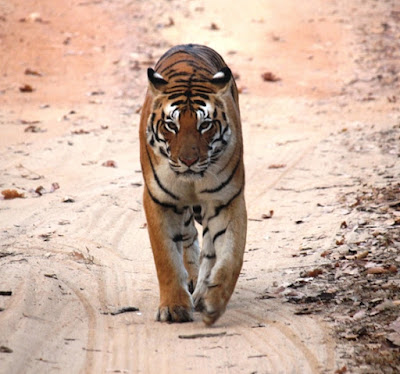 We spot the female tiger lying on the soft dirt path, seemingly undisturbed by our approaching safari vehicle. Because they have delicate paws, tigers like to walk on the dirt paths intended for motor vehicles, but being in the open like that makes her easy to see. We are the only vehicle around and watch in amazement as the tiger gets up and walks toward our vehicle. Our driver backs up multiple times to give the tigress space each time she nears the vehicle. Our cameras click continuously recording the experience so we can savor it again later. 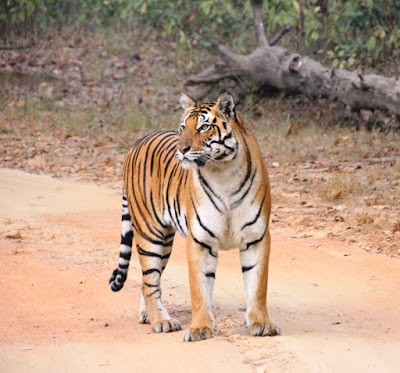 We are on our first wildlife safari in KanhaNational Park in central India, a place we have traveled a long distance just for moments like this. Within an hour of entering the reserve we have made our first sighting.


When most people think about wildlife safaris they think of Africa, which is an excellent place to see lions, elephants, and other animals in the so-called “Big Five.”
But Africa doesn’t have Bengal tigers. And that’s why we went to India.


Our tour begins
After flying from Austin, Texas to Delhi, India and spending a day touring the old and new parts of that city, we left for Kanha National Park. That meant a flight to the small town of Jabalpur and then a four-hour drive on dusty, bumpy roads to the Kanha Jungle Lodge, arriving after dark. 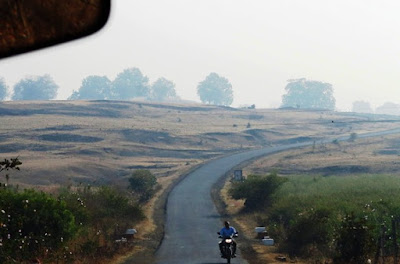 Although the journey is not so easy, Kanha is often described as India’s best game sanctuary and a model for wildlife conservation everywhere. The park’s grassy meadows, flat-topped hills, numerous crystal clear streams, and lush sal (a kind of tree) forest were inspiration for Kipling’s Jungle Book. Because it’s an important tiger reserve, it was high on our list of places to search for tigers.
Wildlife drives are regulated by the park service and are only allowed from daylight to 11:00 a.m. and again from 3:00 to 5:30 p.m. During our three-night stay at Kanha, we went on four safaris, two morning and two afternoon. 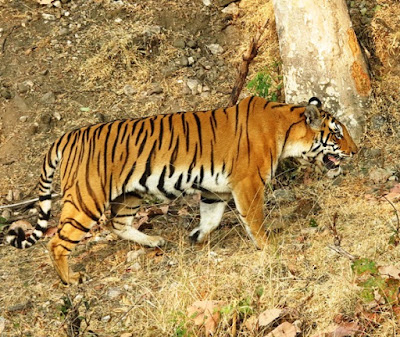 Wakeup calls for morning safaris start at 5:00 a.m. After we sip a cup of hot tea and munch a biscuit, the lodge’s resident naturalist takes us to the park entrance for registration and to pick up a driver and mandated park guide. Once inside the park, we take off on the main road in a cloud of red dust mixed with fog formed into a mist that hangs over the area most of the morning.


A golden sunrise streams through the trees as Vinod, our driver, checks the dirt path for fresh footprints. We wind around trees, into small valleys, and over simple wooden bridges—all the while scanning the landscape and listening for an alarm call from deer that might indicate a tiger is nearby.
Vinod has lived in this area and spent time in the woods since childhood, so we soon decide that he thinks like a tiger. He is keenly observant and knows where to find the large cats and where they are likely to re-emerge after vanishing into the woods. 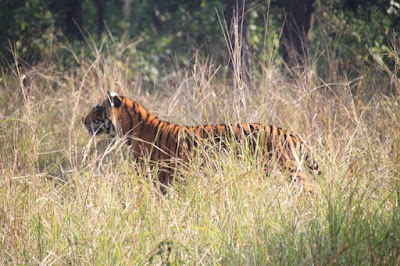 We watch solemnly, containing our excitement so as not to startle the tiger. When she finally heads into the brush and disappears inside the forest, our guide tells us she is on the hunt for food and has wandered a good distance from her cubs. So he doesn’t think we will see her again this morning
But we are ecstatic! Almost immediately we have fulfilled our mission to view tigers in the wilds of India. As the morning progresses, we also see spotted deer, black-face monkeys, wild hogs, barasingha (swamp deer), and assorted birds. It’s our first game drive, and what a success it has been. 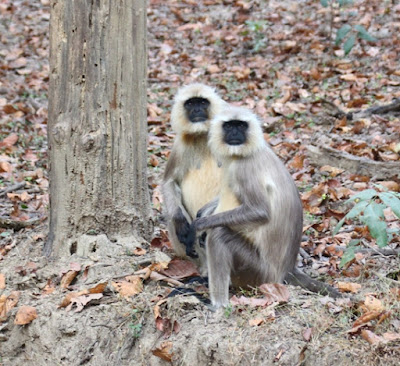 I’ll follow up with more of our adventures in India in future posts.
Photos by Larry and Beverly Burmeier


Posted by Beverly Burmeier at 2:19 PM