Niagara Falls, New York
NiagaraFalls is actually a combination of three waterfalls that lie on the border between United States and Canada. The largest, Horseshoe Falls on the Canadian side, is the most powerful waterfall in North America. It is separated from the American Falls by Goat Island. Also on the American side is smaller Bridal Veil Falls. Watching torrents of water pour over the wide ledge leaves no doubt in your mind that the combined falls, 165 feet high, form the highest flow rate of any waterfall in the world—750,000 gallons each second.


Located in Niagara Falls State Park on the Niagara River 17 miles northwest of Buffalo, New York, this is the oldest state park in the nation. In addition to Niagara Falls, the park includes 400 acres of lush landscape and famous attractions like Maid of the Mist and Cave of the Winds.
Maidof the Mist offers a boat ride that ventures close enough to feel the forceful spray of Niagara’s tumbling waters—so a waterproof jacket helps keep clothing and cameras dry. Cave of the Winds provides a close up view of American and Bridal Veil Falls—amid forceful winds as you descent 175 feet into the Niagara Gorge while walking along wooden decks through the foaming water. Even though you’ll be given booties and ponchos, expect to get wet. Both adventures provide thrilling ways to experience this American icon, which has lured visitors to its thundering roar and powerful elegance for generations.


Fun Fact: Decks at Cave of the Winds are torn down and re-built every year. Because the water is still frigid in spring, park employees work for only 20 minutes at a time re-building the famous decks.


Cumberland Falls, Kentucky
CumberlandFalls lies in the state park of the same name. This 68 foot tall waterfall is often called Niagara of the South because, like the famous falls, it spreads over an extensive ledge rather than gushing in a single stream. Its 125-foot wide curtain of water flows into a wide gorge, splashing dramatically over boulders in the Cumberland River. 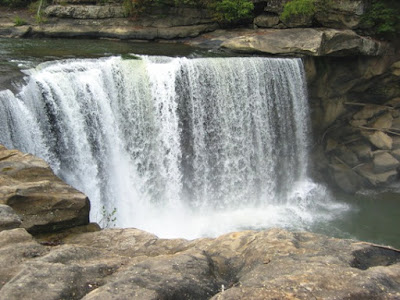 During the day, sunshine glistens through the spray as it bounces off the rocks. But when night falls, visitors are enthralled by colorful moon bows, which happen when the moon’s light is reflected and refracted off water droplets in the air. Because this atmospheric phenomenon is rare in the Western Hemisphere, each month it attracts legions of people hoping to glimpse this unusual sight.
After soaking in the serenity of this lovely waterfall, visitors can participate in other Cumberland State Park activities such as hiking on 20 miles of trails, mountain biking, fishing, horseback riding, and white water rafting. Although cabins and camping are available, consider staying at the historic DuPontLodge. 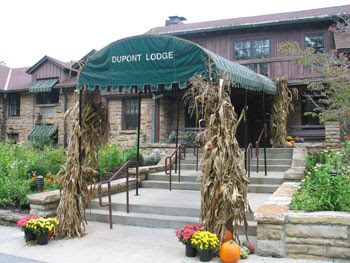 Fun fact: The best opportunities to see a moon bow occur two days before and two days after a full moon on clear nights. Plan your visit according to full moon appearances.
Photos from free sources and Beverly Burmeier
Posted by Beverly Burmeier at 10:37 AM