As a new year arrives and we start planning travel adventures for 2019, it’s a good time to look back over the past year at the places and activities we experienced. There was a good mixture of domestic and international travel and even a little time off between trips. This is what 2018 looked like for Larry and me.

January:  We arrived in Nepal after spending two weeks, including Christmas and New Year’s Eve in India. As many of you know Larry became ill and spent eight days in a hospital in Kathmandu, but before that happened, we traveled to the beautiful resort town of Pokhara.

February: This was a month for recovery, but later we took a few days to visit San Antonio, a favorite city of ours that (fortunately) is just a little more than an hour away. Early spring blooms added color to the Chinese Garden near the San Antonio Zoo.
March: During Spring Break we took a grandson to several notable sights in Central Texas including Enchanted Rock near Fredericksburg and scenic Pedernales State Park where rocks and water combine for a perfectly scenic romp.
April: We spent a glorious week in Carmel, California exploring beaches, parks, and forests of Big Sur along Highway One. This is one of America’s most spectacular road trips, with plenty of trails to hike and new sights to see around every bend of the coastline.﻿
May: We finished that driving trip in San Francisco with adventures including a round of golf, wine tasting at a vineyard, climbing the tiled steps on 16th Avenue, and wandering around Golden Gate Park.
﻿﻿﻿


﻿June: Disneyworld may not be everyone’s cup of tea, but it’s certainly fun when treating a granddaughter to the experience. If you go early enough in the summer before it gets too hot and crowded, you’ll come to understand the Disney magic that makes this place so well liked.﻿
﻿﻿July: It was time for a trip to a less-traveled destination. We headed to the exotic country of Namibia, where we would not only see many species of African wildlife but would also have the opportunity to witness—and climb--the world's highest sand dunes, the red dunes of Sossusviel.﻿﻿
August: Our African journey continued into Botswana, a growing destination for incredible wildlife safaris. We stayed in multiple remote camps and were able to observe activities aimed to conserve Africa’s resources and preserve wildlife species like lions, elephants, and leopards.
September: Although we had been to Ireland and London, England several times, we wanted to see more of the United Kingdom, so we booked a cruise that sailed around the UK and Ireland. Despite the hurricane that interrupted our trip in Scotland, it was a pleasant journey that ended with a day in Bath and the Cotswolds.
﻿

October: We had booked a cruise on the magnificent Rhine River that started in Basel, Switzerland. Since we had five days between cruises, we spent that interlude in Geneva and went paragliding off a mountain in the Alps of France. Then we enjoyed the towns, castles, and vineyards as the ship sailed to Amsterdam.
November: Most of the month was spent visiting children and grandchildren in various stateside locations, but one excellent Texas day trip we recommend is to Lost Maples State Natural Area. Fall colors made hiking on trails in the park an event to remember.
﻿


December: Back in Central Texas, we celebrated the holiday season with an evening drive to Johnson City for its Festival of Lights. We also walked down Austin’s iconic 37th Street and reminisced about visiting to the famous Trail of Lights at Zilker Park. This annual event never ceases to amaze as it grows better every year. 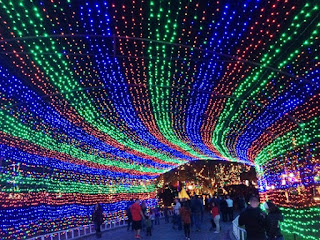 
What a wonderful year you had in 2018! I took three international trips in 2018: Uzbekistan, Iceland, and Europe (Germany, Poland, Ireland, France and Spain) I blogged about Uzbekistan and just started blogging about Iceland. Www.LoisJoyHofmann.com