The marvelous mystery of Stonehenge

Even today, Stonehenge, the miraculous monument in England, is a mystery to visitors and archaeologists alike. Many theories surround this super stone circle regarding its purpose, how it was constructed, and what significance there is in the specific arrangement of stones. 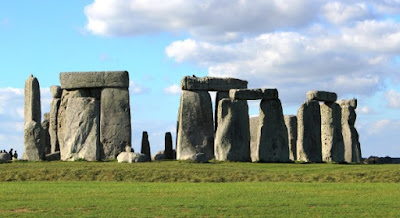 While we were anxious to hear what experts have concluded about this unique prehistoric monument, none of that really mattered when Larry and I stood in front of this most marvelous of human creations. Stonehenge is truly awe inspiring and inspirational all by itself. But it is even more so, when contemplating the time, courage, skill, and labor that went into its creation. 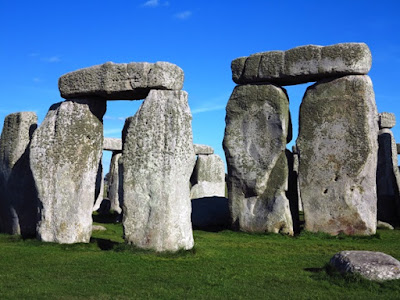 Located in Salisbury Plain, about eight miles north of Salisbury, England, Stonehenge was built in six stages between 3000 and 1520 BC, during the transition from the Neolithic Period (New Stone Age) to the Bronze Age. Along with a short history, I’m including photos from our recent visit, which I hope will encourage you to visit if you have the chance.

One theory is that the site was a place where sick people went in hopes of being cured by the monument’s healing powers. Other experts think the alignment of stones with the sun, moon, and stars was a kind of ancient scientific observatory to track movement of those celestial bodies. Perhaps Stonehenge was a temple to sun or moon gods. One thing is known for sure—it was used as a cemetery, a place for important funeral ceremonies.

How?
4,000 years ago, Stonehange was made up of an outer circle of 30 standing stones called sarsens. These surrounded five huge stone arches in a horseshoe configuration. Two other circles were  made of smaller bluestones and four station stones positioned outside the central monument. A circular ditch and bank surrounded the entire site—and remains today.


The lighter bluestones weight about the same as two cars, and the upright sarsen stones are each as heavy as four elephants. Altogether the boulders would have been dragged or hauled from hundreds of miles away. Then there was shaping the stones—without the use of modern tools. And finally, lifting the enormous boulders to their standing position would have required engineering techniques not known at the time, especially since there are interlocking joints not seen in other prehistoric monuments.
It is also surmised that about 200 or 300 years later the central bluestones were rearranged to form a circle and inner oval, and a main avenue was built to connect Stonehenge with the river Avon. Between 1800 and 1500 BC more rearranging was started but probably not completed.

Not just a bunch of rocks

Most likely Stonehenge served a number of purposes over thousands of years. Its uses probably evolved over centuries depending on cultural shifts and social norms—just as the builders changed due to migration from Europe. It is so much more than just big old rocks stacked in a circle. We can admire its architecturally sophisticated design and building techniques that made it a World Heritage Site in 1986--without needing to pin precise historical facts on the famously complex site.

Posted by Beverly Burmeier at 10:30 AM