The National Park Service brochure describes Bryce Canyon as “Poetry in Stone.” As I started to write this post I couldn’t think of a more apt description. You may think about poetry in soft, esoteric terms, the exact opposite of hard, static stone. But the vistas in Bryce are deceptive; the landscape is constantly changing. 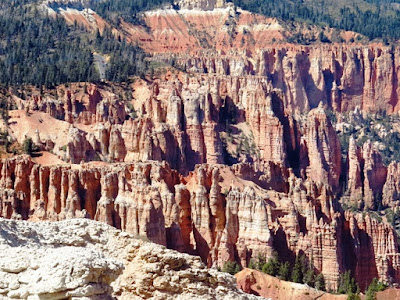 Whether you are standing on the rim in a crisp morning sky, observing shadows while walking along trails in bright sunlight, or enjoying the kaleidoscope of colors at sunset, your memory will be etched with different scenes from this dynamic national park in southern Utah. 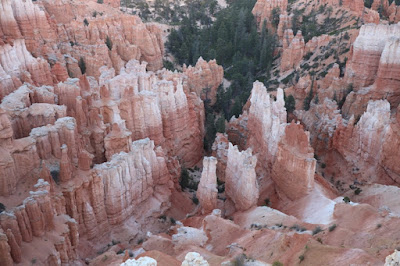 In addition to daily changes, weathering and erosion continue to shape the striking rock formations. Between 55 and 40 million years ago, Utah was a mountain-encircled basin, and the area was full of water. For millions of years, rivers deposited sediments, mostly dissolved limestone, into a system of large lakes. As the Colorado Plateau began to rise 20 million years ago, the lakes dried up. Layers of rock emerged, and formed multi-layered cliffs. 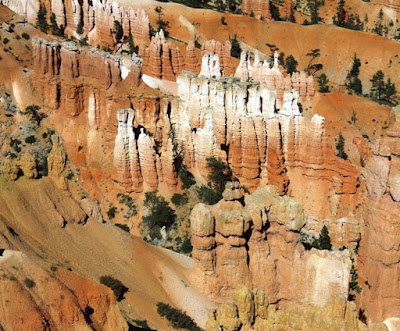 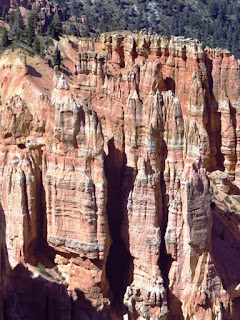 Eventually the top may collapse, leaving a column. Rain continues to sculpt these limestone pillars into spires called hoodoos, formations for which Bryce is famous. As time goes by, new hoodoos emerge while others become reduced to lumps of clay.

Knowing how the enormous forces of nature created Bryce Canyon can help visitors appreciate its unique beauty, but a geology lesson isn’t necessary to enjoy the gorgeous multi-colored sandstone canyons, windows, and hoodoos.

We left Zion National Park and drove just two hours to Bryce. Our first stop was at the Visitor Center for an overview of the park. At Zion, you look up to view imposing rock formations; at Bryce you look down into the canyons. 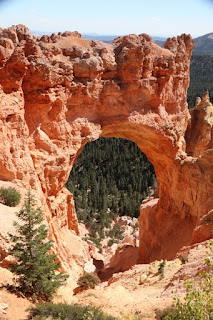 From the Visitor Center we set out to drive the 18-mile paved road, stopping at noted overlooks along the way. During the summer, a free shuttle follows the plateau rim with stops at popular sites. More than 65 miles of hiking trails, most starting from overlooks, take visitors down into the canyon for a closer look at hoodoos.

Because we only had one day to spend in the park but wanted to go deeper into the canyon, we decided to do the Navajo Loop Hike from Sunset Point. We chose the Wall Street path filled with lots of switchbacks that descended 800 feet. Although the trail is 1.3 miles round trip, it seems much longer because of the steep inclines and switchbacks. But that’s what makes it so breathtaking at every turn that we were snapping photos almost constantly. We couldn’t resist each new sight filled with red, white, pink, brown, tan, and white formations. 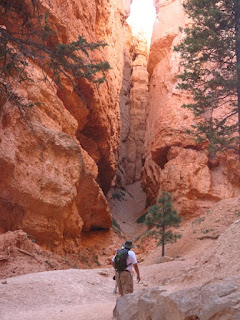 We saw spectacular formations--many have been given names—and walked through narrow passageways and tunnels on our downhill trek. Of course, since we walked down, the return was uphill on more switchbacks. Some people get short-winded because of the elevation (signs at every overlook record the elevation, which gets over 9,000 feet at Rainbow Point), but stopping to take photos provides an easy rest.


As we returned to the Visitor Center, we stopped at Inspiration Point and Sunrise Point, two overlooks that had been too crowded earlier in the afternoon.  That can happen in summer or even in September, as we experienced. Other viewpoints along the road include Fairview Point, Natural Bridge, Agua Canyon, and Ponderosa Canyon. 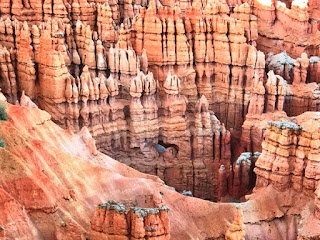 From April through October days are pleasant and nights are cool. You may start out wearing a jacket but shed layers at mid-day. Stargazing at night is popular because of the high elevation, clean dry air, and lack of light pollution. No matter what time of day you visit, it’s easy to become mesmerized by the variety of hues, shifting shadows, and sheer enormity of the massive rock formations. 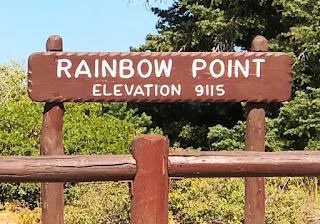 Posted by Beverly Burmeier at 10:59 AM