Having traveled to and through New Mexico numerous times over several decades, my husband Larry had often passed by a sign on US 87 touting Capulin Volcano. But he never stopped to check it out.

That’s where my curiosity comes in. I can’t pass up anything that is part of the National Park System. When I saw that Capulin Volcano is a National Monument, I knew we were about to take a detour.

Actually it’s less than three miles from the main highway, a short drive on NM 325 (30 miles east of Raton on I-25). And well worth a visit.

Capulin Volcano is the result of an eruption 60,000 years ago. Glowing lava spewed high into the sky, solidified, and dropped back to Earth, accumulating around the vent or opening. The eruption produced volcanic rocks that formed Capulin into a cinder cone volcano. 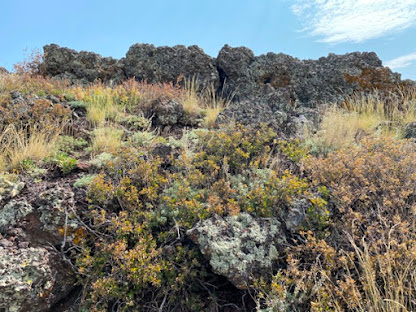 Early in the eruption, the first of four lava flows spread eastward from the cinder cone’s base. Later eruptions resulted in lava flows on the south, southwest, and west sides of the cone. Super-heated lava flows cooled while lava continued to flow underneath, resulting in interesting ridges that are perpendicular to the flow direction.

Capulin rises over 1,300 feet above the plains, 8,182 feet above sea level. As natural forces changed volcanic rock into soil, plants eventually took root. Prairie grasses, wildflowers, and pine trees began to proliferate. Since the volcano lies at the base of the Rocky Mountains, it straddles two very different habitats--the grassland of the plains and the forest of the mountains.

In addition to getting information at the Visitor Center, you can actually walk on the volcano or venture into its crater. We walked the moderate one-mile loop called Crater Rim Trail. It was our first high altitude adventure on this trip, and we soon learned to go a little slower than our start. On the rim you have sweeping views of lava flows that extend far beyond the park boundary covering almost 16 square miles. If the day is really clear, you might be able to see New Mexico, Texas, Colorado, and Oklahoma from the rim trail’s highest point.

The volcano is extinct, so you’re probably safe descending 105 feet to the bottom of the crater on the short Crater Vent Trail. Or take an easy, paved 10-minute nature walk from the Visitor Center for close-up views of prairie landscape and lava formations.

We spent an enjoyable hour traversing this symmetrical cinder volcano and observed nature’s recovery from the fiery eruption over many thousands of years. During our late September visit we saw the beginnings of fall color on the slopes; during spring, wildflowers create a lovely mosaic among the cinders. Picnicking and birding are also popular activities.