Searching for truffles in Italy

One of the most interesting experiences we had during our trip to Italy last year was a truffle hunting excursion. 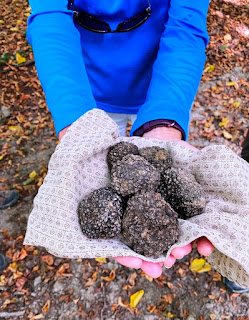 To get to the forest where we searched for truffles, we drove through wine country near Alba in the Piedmont region of northern Italy.


We met up with a trifolao, a local truffle expert. Alba is the center of truffle trade in this area. From there we went to a plot of woods outside the city where we spent almost two hours trekking on established paths as we followed our trifolao and his highly trained sniffer dig, Dora.

Truffles are some of the most expensive foods in the world, even though they are actually fungi that grow underground on the roots of certain oaks and other trees. We learned about the environment and conditions needed to produce various types of truffles. 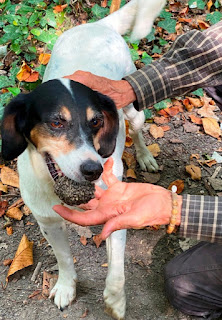 Italian white truffles are the most sought after, but this aromatic delicacy is extremely fickly about growing conditions. They need a specific combination of trees, soils, and moisture levels to survive, so locales where they are grown is limited. Because these are very rare, truffle hunters are exceedingly secretive about where they find white truffles, mostly gathering them at night under cover of darkness. White truffles are also very pricey as a pound can often cost more than $3,200.


Black truffles are easier to find with the season for winter truffles running from November to March and summer truffle season extending from May to September. Since we were there in August, those are the truffles we went hunting for. These have been selling for a not-too-shabby price exceeding $1750 per pound.

Like many other truffle hunting dogs, Dora is not any particular breed. She has an excellent nose and was painstakingly taught to forage for truffles.  She literally sniffs them out and then digs around tree roots to find the treasure. The hardest part of the training is teaching the dog to delicately carry the truffle in its mouth as she trots back to the handler. A close connection and sense of trust be established between human and dog. 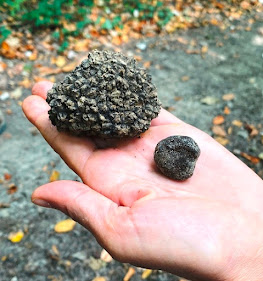 Watching Dora work was a quite spectacle.  It’s a task the dog loves and does with great energy. She would trot—sometimes run--away from her trifolao, find a likely source, and start scratching in the dirt until she unearthed the prize. For the dog’s reward, the trifolao kept a stash of treats in his pocket that Dora was very excited to receive, although we never knew exactly what it was.

The truffle hunter collected truffles gathered on this excursion in a small cloth pouch that hung from his shoulder. Our guide estimated that he had accumulated more than $500 worth of truffles during our short time on the trails. 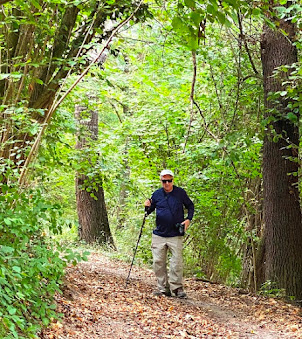 The area where we searched for truffles was on acreage that the hunter owned himself. As full-time hunters, he and his son-in-law gathered truffles almost every day—or night. 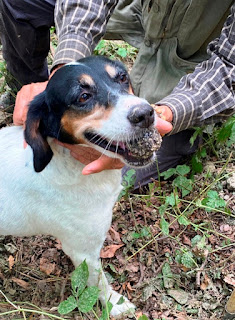 They were able to sustain their business during the Covid pandemic even though tours were limited and demand fluctuated. Originally our visit included a luncheon provided by his wife using truffles in several recipes. However, that part was canceled due to regulations during the pandemic. Still, hunting for truffles is one of our most fondly remembered activities. It was a real learning experience about a local way of life and a fun way to spend a morning in northern Italy.
Posted by Beverly Burmeier at 8:30 AM