Stay in a true Western hotel

Sunset transformed the tan adobe walls of the Gage Hotel in into a glowing orange, an earthy hue reminiscent of the desert just a stretch down the road.  As we stepped up to the porch and through the front door, we entered the Old West.

After spending five days rafting, horseback riding, and touring Big Bend National Park, about 70 miles away via US 385, we were pleasantly surprised by the beauty and serenity of the Gage.

Restored to its original glory in stages during the past 30 years, the Gage is a Texas Historic Landmark.  Built in 1927 for Alfred Gage, a prosperous businessman and rancher living in San Antonio who needed accommodations in West Texas, the original hotel welcomed travelers in this widespread, sparsely populated ranching and mining community.  The building fell into disrepair after Gage died until J. P. and Mary Jon Bryan of purchased it in 1978.  Using authentic antiques and regional craftsmen, the transformed it into an example of early 20th century Wild West days. 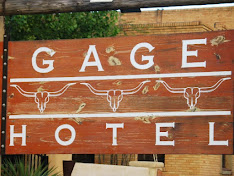 After checking in, we left the main hotel and walked through the courtyard, lavishly landscaped with purple, pink, and white flowers, to our room in Los Portales, “The Porches.” This Spanish-inspired addition was built adjacent to the original property in 1992.  As for all 20 rooms in Los Portales, ours featured an antique entry door constructed of aged mesquite wood salvaged from abandoned buildings in Mexico.  The doors are all different, most over 100 years old and handmade of dozens of pieces of wood fitted together in complex designs. 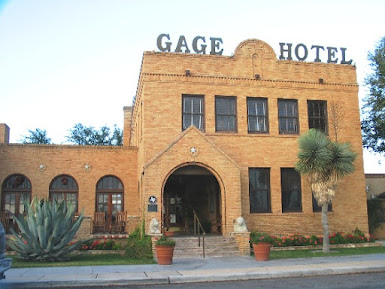 No modern plaster ceilings here, either: constructed of beams made from ponderosa pine found in the nearby Davis Mountains, the ceilings resembled thatched roofs from a century ago. Sticks between the logs, made from the flower stalk of a local plant named sotol, added authenticity to the architecture. 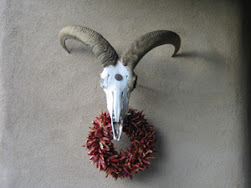 Right outside the door of our room we stepped into a traditional adobe courtyard or “placita,” which historically provided protection from the hot desert sun and housed the community well—now interpreted as a lovely fountain made of Mexican volcanic stone. 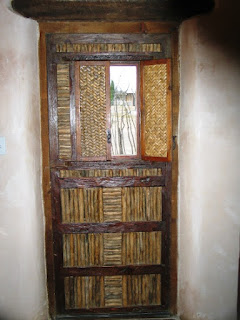 Following pioneer construction techniques, bricks for Los Portales were made on premises—80,000 made from a sun-dried mixture of caliche soil, straw, and water--and walls were later finished with a coat of gypsum plaster.  Brick on porches, clay floor tiles, and brightly hand painted bathroom tiles are all from , manufactured by original techniques.

Room furnishings—blankets, tables, chairs, headboards, lamps, and artwork—reflected the combination of Western, Native American, and Mexican cultures. And, just so you wouldn’t forget that this was the Old West, Big Horn sheep skulls decorated outside walls. 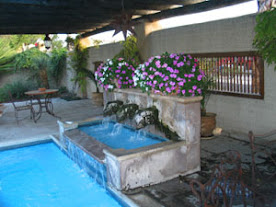 If the weather had been warmer, we might have taken a dip in the pool or people-watched from wooden rocking chairs on the porch.  Instead, we lit a fire in our room’s fireplace—logs provided—to chase away the November chill.  Watching flames flicker from the comfort of our queen-sized bed was the epitome of relaxation.

In addition to Big Bend National Park, Marathon is convenient for day trips to McDonald Observatory, Big Bend Ranch State Park, and Sul Ross University in Alpine. The Gage Hotel is located at the intersection of highways 90 and 385. www.gagehotel.com