Get Personal with Alaska's Glaciers 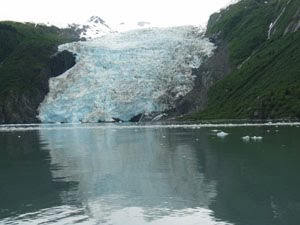 For a unique tour that provides a bird’s eye view of Alaska’s splendid glaciers, step aboard the luxurious catamaran, the 137 foot M/V Klondike Express. This boat, the mainstay of Phillips Cruises and Tours, leaves the port of Whittier for a fully narrated tour daily from early May until mid-September.

Even if you’ve seen glaciers from a mega-cruise ship in Alaska’s Inside Passage, consider taking the Phillips 26 Glacier Cruise. It may appear that your large floating resort ventured close to the masses of ice, but reflections from water and sun make sea side mountains appear closer than they really are. Large cruise ships must stop about two miles out, especially when fjords and bays are filled with floating ice chunks broken off from the main masses. The Klondike Express skims through the water, arriving a scant two-tenths of a mile from the huge glaciers. 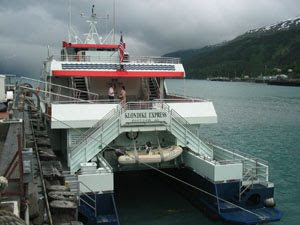 In four and one-half hours, this catamaran glides 135 miles through the protected waters of Prince William Sound, zipping smoothly at speeds up to 46 miles an hour over routes first explored by British navigator Captain James Cook and railroad financier Edward Henry Harriman in the late 1800s.


Large picture windows offer unobstructed views from inside (while you’re enjoying the included hot meal and drinks), and three outside viewing decks put you right where the action is. Early in our journey 10,000 blacklegged kittiwakes blanketed the sky. These birds spend their lives at sea except during nesting season when they go cliffside to lay eggs in spots safe from predators. Further on, you may glimpse humpback whales swimming and otters floating on their backs. With over 125,000 sea otters and 7,000 bald eagles in this area, opportunities abound for great wildlife photos. 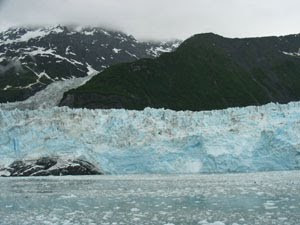 Visitors on the excursion experience College Fjord as Harriman and his family did in 1899. Glaciers had previously encompassed all the territory, so there was no bay; however, as the ice gradually receded, navigable waters opened up. Then Harriman sponsored a steamship expedition so scientists could record information about glaciers and mountains in the area.


Harriman’s family labeled glaciers in the fjord with names of familiar Eastern colleges—women’s colleges on the left and men’s colleges on the right. Holyoke, Barnard, Wellesley, Vassar, Bryn Mawr, and Smith lead the way to Harvard, the largest glacier in the fjord. Centrally located, Harvard is the second largest tidewater glacier in Alaska. It measures 38 miles long, one and a quarter miles wide, and 400 feet high, with another 300 feet of ice hidden below the surface. Continuing around the fjord, Yale, Dartmouth and some smaller glaciers spread seaward. 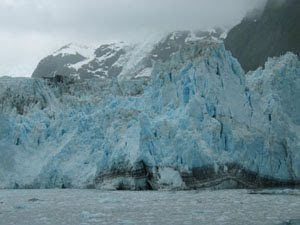 Passengers see nine of the Sound’s seventeen tidewater glaciers--glaciers that come to the edge of a mountain and go directly into the sea. As the catamaran leaves College Fjord, alpine glaciers Amherst and Crescent—entirely in the mountains, never reaching open water--come into view. Limitless peaks and spikes of ice and rock provide panoramic scenes of indescribable majesty.

Moving into Barry Arm, the Klondike Express glides by more tidewater glaciers, which converge at the tip of the fjord. Spectacular views of massive ice formations dating back hundreds of thousands of years surround the boat. One of the loveliest is Surprise Glacier with waterfalls cascading down the mountain.


Posted by Beverly Burmeier at 9:00 AM

My daughter went on a cruise like this. Sounds like a marvelous trip. She went on and on about the glaciers. If I ever get to Alaska I will remember to sign up to see Surprise Glacier. Thanks for the tip!

I have always wanted to go to Alaska but so far I haven't. Wow- you have such an amazing life.