Kayaking is a peacful way to experience Mazatlan 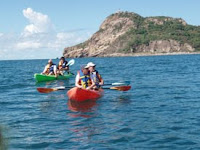 Paddling a kayak is a piece of cake in a river or lake, but it can be a challenge in the ocean if breezes cause swells to kick up. Fortunately, our recent kayaking adventure at Mazatlan on the Pacific coast of Mexico was just about perfect with calm seas, sunshine, and temps in the low 70s.


We were on a shore excursion from our cruise to the Mexican Riviera aboard Royal Caribbean Radiance of the Seas (sailed from San Diego). Called the Pearl of the Pacific, Mazatlan is the busiest port between Los Angeles and the Panama Canal. It’s a favorite stop for cruise ships as well as tourists looking for an authentic Mexican destination for their vacation. 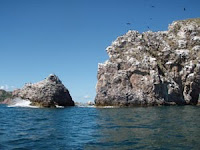 After boating to Stone Island (really a peninsula) from the ship, we kayaked to nearby Goat Island. A planned hike to the top of a hill had to be scrapped because rain the night before made the trail too slick. That gave us extra time to kayak around Kaktus Island, so for more than an hour we followed our guide Alejandro on this pleasant five-mile excursion.

After coming ashore at the beach, we sampled a delicious snack of fresh fruit—bananas, cantaloupe, pineapple, and mangoes—finished off with sweet pastries and cold drinks. We walked along the beach, snapping photos of the picturesque setting. The sun was warm enough to give me a rosy glow despite using sun screen, although the slight breeze quickly dried any sweat beads that dared pop out.  We watched a group of horseback riders trot along the beach and soaked in the quiet peacefulness of this remote location. 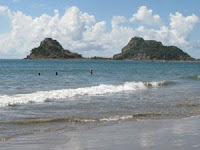 The area around Mazatlan has been settled since prehistoric times, although development of the city itself is relatively recent, with expansion in the 1970s to the white sand beaches of Playa Norte. Dramatic ocean views and golden beaches invite visitors, and tourism has grown in importance to Mazatlan (population 750,000).  But it also has a strong industrial and commercial base that keeps the economy strong. 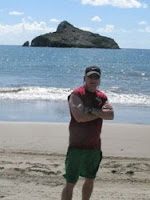 A large part of its attraction is that it remains a traditional Mexican town.  Colonial architecture is featured in Plaza Machado. Monumento al Venadito (monument to deer) honors the Aztec name of Mazatlan—“place of the deer.” On the waterfront Malecon links the old section of town with the hotel-packed Zona Dorado. Tourists gravitate to the Golden Zone, filled with shopping, dining, and beach-combing opportunities. Several shore excursions from ships will take visitors sightseeing here. A hike up to El Faro Lighthouse provides excellent panoramas, if you can work it in.

Back on the Radiance, we took the free shuttle to the terminal building--and a brief shopping jaunt. I have a hard time resisting native-made items and purchased a small embroidered cloth purse (which I love to use now that we’re back in the States).

Posted by Beverly Burmeier at 10:48 PM

Beverly that trip sounds so amazingly peaceful. The last exotic place I traveled was Sakhalin, Russia back in 2006? I desperately need a sandy beach getaway.

Good luck posting everyday on the blogathon-I'm also participating in it and enjoying every minute!

I'd love to take a trip like this one. Sounds like a good time. I've not yet been to Mazatlan. But maybe soon. Have you written about Cancun?

I've been to Cancun but haven't written about it.