Water pounded the shoreline of South Africa at the Cape of Good Hope, a dangerous place for ancient sailors to round the tip of the continent. From our rocky sea-ward vantage point in Table Mountain National Park on the southwestern coast of Africa, we marveled as two oceans swirled together—the calm Indian Ocean and rough Atlantic—in frothing white waves. But then we drove to another part of the park, a sheltered cove between Simons Town and Cape Point—arriving at Boulders, home of a thriving colony of African Penguins. 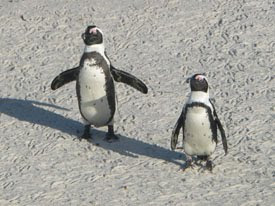 Before visiting South Africa, I thought penguins only lived in frigid regions like Antarctica. But Boulders has proven to be an ideal nesting spot for African Penguins, a species found nowhere else in the world. The flightless birds have thrived here, wandering around the area freely and nesting in simple burrows in the sand or under bushes. The sea and beach provide a natural sanctuary for the fast-swimming, deep-diving penguins, while large granite boulders on the beach offer shade and shelter. 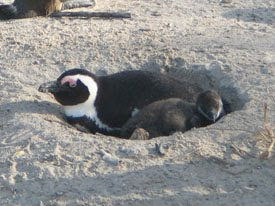 Although 1.5 million penguins lived in the region in 1910, uncontrolled harvesting of their eggs nearly drove the species to extinction. The colony has grown from only four penguins in 1982 to more than 3,000. They can be observed at close range from a raised trail of boardwalks at Foxy Beach in Boulders Bay. As soon as you hear their distinctive donkey-like shrieks you’ll understand why these birds were once called “jackass penguins.” 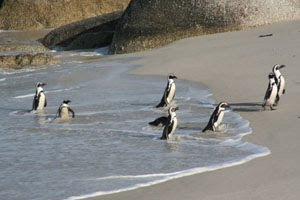 While walking within a few yards of the birds, visitors can search for nests hidden among indigenous brush, observe hens tending their chicks, watch the penguins waddling and prancing, and delight in their splashing antics as sea water sweeps up on the beach. Their humanlike interactions are amazing and fun to watch. African penguins mate in January (they’re monogamous), nest from February to August, and molt in November and December.

Posted by Beverly Burmeier at 7:30 PM

Only four in 1982! Wow, what a comeback. That's great. Thanks for writing about this. I had heard about the place where the two oceans come together but have never seen it. How fortunate you are to have traveled to South Africa!

It was great to see them wandering around Robben Island, as well!

I saw penguins in New Zealand and near Cape Horn; I never thought about them being in Africa.