Mobile tent camps take you into the African wilderness

Camping in tents may remind you of early explorers, but today's mobile tent camps in the wilderness of East Africa, while primitive, are far from roughing it.  True, your tent must be sprayed inside for mosquitos nightly, there's no running water, the only light comes from one 15-watt bulb, and  Masai warriors roam the perimeter of the the camp 24/7 on the lookout for wild animals wandering too close.
﻿ Still, you'll sleep in a canvas tent that's open to cool evening breezes fluttering among the trees that hide it.  You'll dine by candlelight--romantic even though it's the only way to see what you're eating.  Water is heated and delivered to your tent for showers by attentive Masai staff. Gourmet-quality meals are prepared and served by the Masai, and you'll gather in the evening to sip wine and exhange tales of the day's adventures around a glowing campfire.  Not a bad way to camp in the African bush.

Tucked in a remote loction near the Mara River in Kenya, the Siringit tented camp where Larry and I stayed was ideally situated for the annual migration, which is the incredible march of more than a million wildebeest and other native animals from the Serengeti in Tanzania through the Masai Mara in Kenya. During August and early fall hoards of animals migrated across the plains.  Watching wildebeests jump instinctively into the Mara River and splash across as crocidiles snared unlucky victims was an unforgettable sight.

Day-long safari drives across the endless plains of Masai Mara Game Reserve brought amazing views of elephants, zebras, giraffes, gazelles, cheetahs, ostriches, and bird varieties too numerous to remember.  Each morning we left camp after a breakfast of fruit, cruissants, omelets, and sausage (delicious--not what you expect for camp food).

Bernard, our driver, maneuvered the Range Rover through the daunting landscape.  We splashed through rock-studded river beds and went off-road across harsh grasslands.  Herds of wildlife roamed on the savannah with mountains in muted hues painting the background.  At lunchtime we looked for a solitary balanite tree for shade and unpcked the generous picnic provided by our Masai chefs. 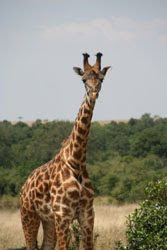 Mobile tent camps (as opposed to permanent tent camps) allow you  to feel part of the wilderness instead of just an onlooker.  It's as close to an authentic bush camp as you can get but far more luxurious than in the days of Hemingway or Roosevelt.

Our fabulous photo safari experience in Tanzania and Kenya was arranged by International Expeditions. 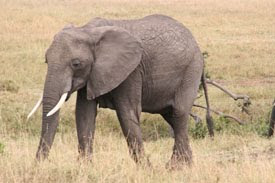 Photos by Larry and Beverly Burmeier
and Michael Treadwell

Posted by Beverly Burmeier at 10:01 PM

Great article. Getting into nature can be great. I've found that establishing who is in-the-know is essential. I camped in the desert with an expert on the U.S. Northwest. He did not know the desert. He wanted to sleep out in mere sleeping bags and tried to handle cacti parts that had fallen on the ground. Neither is a good idea. You can see a few articles on U.S. camping I wrote here: http://hubpages.com/hub/How-to-Start-a-Campfire. Thanks for the great article.