Our itinerary said a park ranger would lead us on a hike to Olmoti Crater.  The itinerary was planned in America.  We were in Africa.

"No park rangers are available," Didas, our driver, said as we drove to the Ngorongoro Park station.  After picking up our group from lunch at a resort in the Tanzanian park, Didas headed out on the typically pock-marked road for the mountains.

My husband Larry and I, along with another couple, had been in Tanzania for almost a week enjoying wildlife safaris in Tarangire National Park, Ngorongoro Crater, and the Great Rift Valley.  Didas had plenty of experience in this environment, having worked 10 years as a park ranger and more than two decades conveying visitors like us around the wilderness.

He didn't seem surprised that we'd be on own for the hike--except we weren't allowed to tromp through the park without an armed escort.  But Didas knew where to find a guide.  As we drove along the dusty road, he suddenly stopped the vehicle and backed up.  Standing beside the road were two Masai warriors (young men between the ages of 18 and 36), doing what most tribal warriors do--hanging out under the guise of protecting the village.

"Can you speak English?" Didas asked in native Swahili.  One young man jumped up excitedly,.  "Would you take these people to Olmoti?" Didas asked.  The warrior nodded "Yes" and ran to get his spear from under a tree.


He was happy--this would be a great payday.  He knew the drill: Wait beside the road, take tourists on a hike through a region he knew well, tell them a little about Masai traditions, and pose for pictures.  For that he would receive a bounty of American dollars. 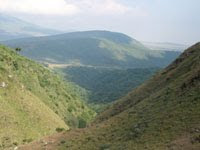 He hopped into the Land Rover with a quick "Jambo" (hello), laid his spear on the floor, and introduced himself as "John."

Stay tuned for "the rest of the story."

what a marvelous journey you are on. just joined in here after your marvelous comment that all blogathoners are winners.