Hike to Olmoti Crater in Africa with Masai Guide Continues

We had picked up a Masai warrior who was sitting beside the road and asked him to guide us on a hike to Olmoti Crater in Tanzania, Africa. After hopping in the Land Rover—with his spear—the young man shared a bit about his background.


John (his Christian name, given at school) was 22 and had learned English while studying a science track that included chemistry, biology, and geography. He was on holiday from school and would return in a few days.

John’s father was a wealthy tribal man--he had 15 wives. John’s future wife, whom he will marry when he is 25, was chosen for him when he was a little boy. If he kills a lion or acquires many cattle, he can have as many wives as his father. His goal is to have more.

John explained that cattle are given to a boy to mark important stages of his life. As the cattle breed, his herd increases in size, providing him enough for a dowry (about 40 head) to give his future wife’s family when they marry. Marriage is necessary because women do the work: They build mud and dung huts to live in, collect fire wood, wash clothes in the river, fetch water, and tend the children.

John’s dialogue reinforced what we had observed during our earlier visit to a different Masai village, where people still live the same simple, centuries-old lifestyle of their ancestors. Despite his outside schooling, including knowledge of the Internet and an email address, John apparently had no interest in changing the culture—something that surprised (and saddened) me. 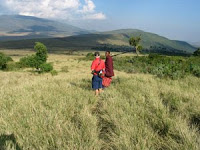 Starting out on the hike, our foursome tromped through waist-high grass, shorter where it had been chopped off for building roofs of the huts. We followed John to the base of the mountain and found a well-traveled trail to follow. Elevation was 8,000 feet, and we trekked up another 1,000 feet, picking our way over rocks and stubble and kicking up clouds of red dust (hard to breathe and not good for our camera lenses), while John skipped nimbly along. Masai tribesmen had brought cattle to graze on the green hillsides and drink from available water. 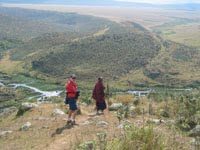 We stopped often, partly to view beautiful vistas of mountains and plains and partly to catch our breath in the thin air. It was a scene far different from the savannas where we had taken wildlife safari drives for several days. It felt good to be trekking in open air--outside of the van that was our usual refuge from unpredictable wild animals.