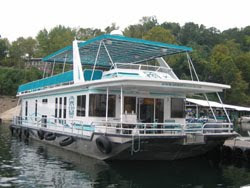 Do you feel the need for a truly stress-free place to hang out? Try vacationing on a houseboat—a floating hotel where waterfront views are guaranteed.


Splash into refreshing water from the on-deck slide, dive off the back-end swim platform, or toss out your fishing line with hopes of catching dinner. Watch wildlife scamper on the shore during early morning or evening hours, and stargaze at night with no city lights to interfere. The possibilities are endless for relaxing and enjoying life with family and friends. In fact, houseboating is great for reunions, multi-generational holidays, or couples’ getaways. 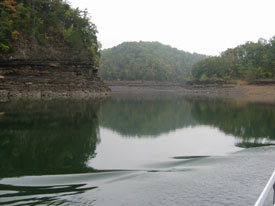 Two-thirds of U. S. states have at least one lake that is suitable for houseboating, often lakes created when dams were built. Rentals are available from Alaska to Florida, from California to New York, and dozens of blue water spots in between.

At least two areas call themselves the Houseboat Capital of the World. Shasta Lake near Redding, California claims the title because of its 370 miles of shoreline, deep azure water surrounded by breathtaking mountains, and spectacular natural scenery. Eleven commercial marinas offer houseboat rentals there. 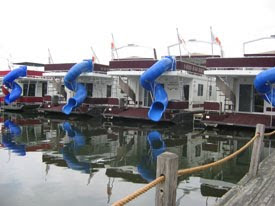 On Lake Cumberland in southeastern Kentucky, where most houseboat manufacturers are located, houseboats are tucked into hundreds of private coves--more than any other lake in the world.

Modern houseboats generally sleep from six to 14 people and are well equipped with all the amenities you expect in a vacation accommodation: full baths, more storage room than a typical cruise ship cabin, clothes dryer, fully furnished kitchen, multiple televisions, hot tubs, and plentiful outdoor furniture for lounging. Rates vary according to location, size of boat, and season.

Here’s a geographically diverse sample of lakes where you can do as much—or little—as desired on a houseboat: 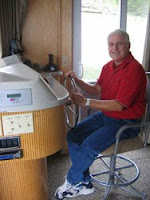 • Lake Powell in Utah--sometimes called the king of houseboating

• Lake of the Ozarks in Missouri, the Midwest’s premier lake destination

• Lake Amistad on the Texas-Mexico border

Although living on the water is most popular during summer months, houseboats are found on lakes in southern areas of the country year round. Check out this environmentally friendly vacation option on a lake close to wherever you live.

I used to live near Lake Shasta. I was told a houseboat could be rented for $3,000 for I don't know, maybe a week.
Another bit of interest. We met a man who used to ask for the leftovers from the fridge when renters left so he could feed the bears! Shelley

This sounds fantastic! We've always talked about doing something like this, but never gotten around to it. I always thought it would make a great writing retreat, too. (Found you through the Blogathon, and I'm so glad!)

That on-deck slide is a riot!